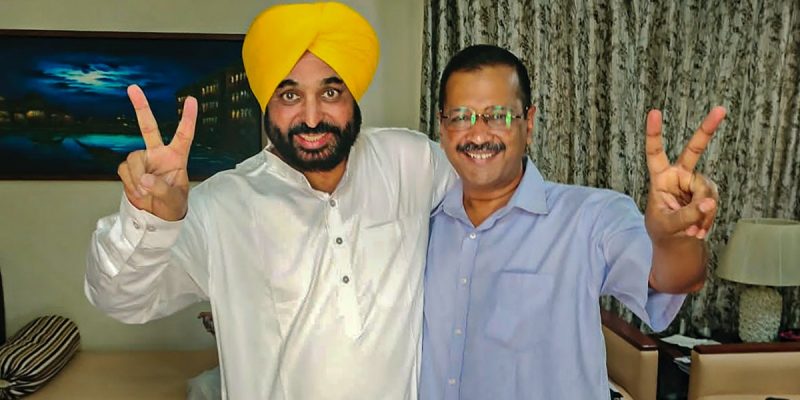 After seizing power in Punjab, the Aam Aadmi Party announced its five candidates who will stand in the Rajya Sabha elections in the state, who will stand for election.

The election to fill 13 Rajya Sabha seats in six states will take place on March 31, as will the counting of votes. The electoral process will be completed by April 2.

The AAP candidates are Sandeep Pathak, the party’s poll strategist, who designed the campaign for Punjab; Raghav Chadha, Co-Head of Punjab Affairs; Harbhajan Singh, former cricketer; and businessmen Sanjeev Arora from Ludhiana and Ashok Mittal from Lovely Professional University. After winning Punjab with an overwhelming majority, the AAP candidates are expected to qualify for the elections.

In the constitutional order of things, the Rajya Sabha, which is also called the House of States, enables its members to raise state issues at the national level, to ensure that they figure in national politics and governance . It is a revered institution of the Indian Republic which gives functional meaning to its federal organization.

However, by selecting non-Punjabis and business tycoons as members of Rajya Sabha under the Punjab quota, the AAP violated the constitutional and representative spirit of Rajya Sabha.

By choosing strategists and party loyalists over deserving Punjabis, the central leadership of the AAP has wrongly given the indication that the party comes first. If membership in Rajya Sabha is to be awarded as a reward to party leaders, strategists and funders, then one wonders where is the “change” in politics that the AAP promises to bring.

The decline in stature and functioning of the Rajya Sabha is mainly due to the selection of “undeserving” candidates for the Upper House of the Indian Parliament. Instead of representing a state through knowledgeable and dedicated members, the House of States has often been used to reward and accommodate party interests. The AAP was no different from this “unrepresentative” phenomenon.

The fact that none of the five selected for Rajya Sabha have a history of raising Punjab-related issues contradicts AAP’s claims that they represent Punjab nationally.

It is not just about the appointment of two ‘non-Punjabis’ but also the question mark over the powers and abilities of other members needed to raise matters of state in the Upper House. It should have been more careful before announcing the appointments of the state, which is heavily in debt and faces a multi-pronged crisis.

There is no doubt that former Indian cricketer Harbhajan Singh made Punjab proud in the sports arena but he was rarely seen raising issues regarding the state. Singh was rarely seen participating or contributing to Punjab-based socio-economic and political discourse.

It seems that Singh’s selection is more about utilizing his “celebrity” status nationally and granting Punjabi-Sikh representation, and much less about representing state issues.

The appointment of Ashok Mittal, owner and chancellor of Lovely Professional University, is a big surprise. Lovely Professional University is a leading private university in the region, best known for making huge profits in the education sector. He paved the way for private universities in Punjab, which today number 20. contrary to its own stated agenda for bringing about social justice in education.

In picking fellow industrialist and real estate tycoon Sanjeev Arora from Ludhiana, the party leadership has made it clear that it is ready to shed its “Aam Aadmi” narrative when it comes to top positions such as the membership in Rajya Sabha. No doubt these businessmen are very successful in their fields, but their ability to represent the state at the national level is indeed questionable. These appointments have already been questioned by politicians at large, who wonder what happened to the “change” promised by the AAP in Punjab.

The nominations of Sandeep Pathak and Raghav Chadha are said to be rewards for their successful trainings in Punjab. Another perspective is that the two were empowered for the purpose of enhancing party interests at the national level.

However, in the process of rewarding loyalists or expanding the party, the AAP agreed to the constitutional objective that Rajya Sabha should provide adequate representation to the states. Delhites Raghav Chadha and Sandeep Pathak being appointed from Punjab, one cannot help but wonder if Delhi and the Delhiites are representative of the people of Punjab in parliament.

These appointments also challenge the faith and confidence of the AAP leaders in Delhi in the intellectual class of Punjab. There is no shortage of young scholars, activists and experts from various fields who have done much work for Punjab. They certainly possess the capacity required to raise the issues of Punjab at the national level. 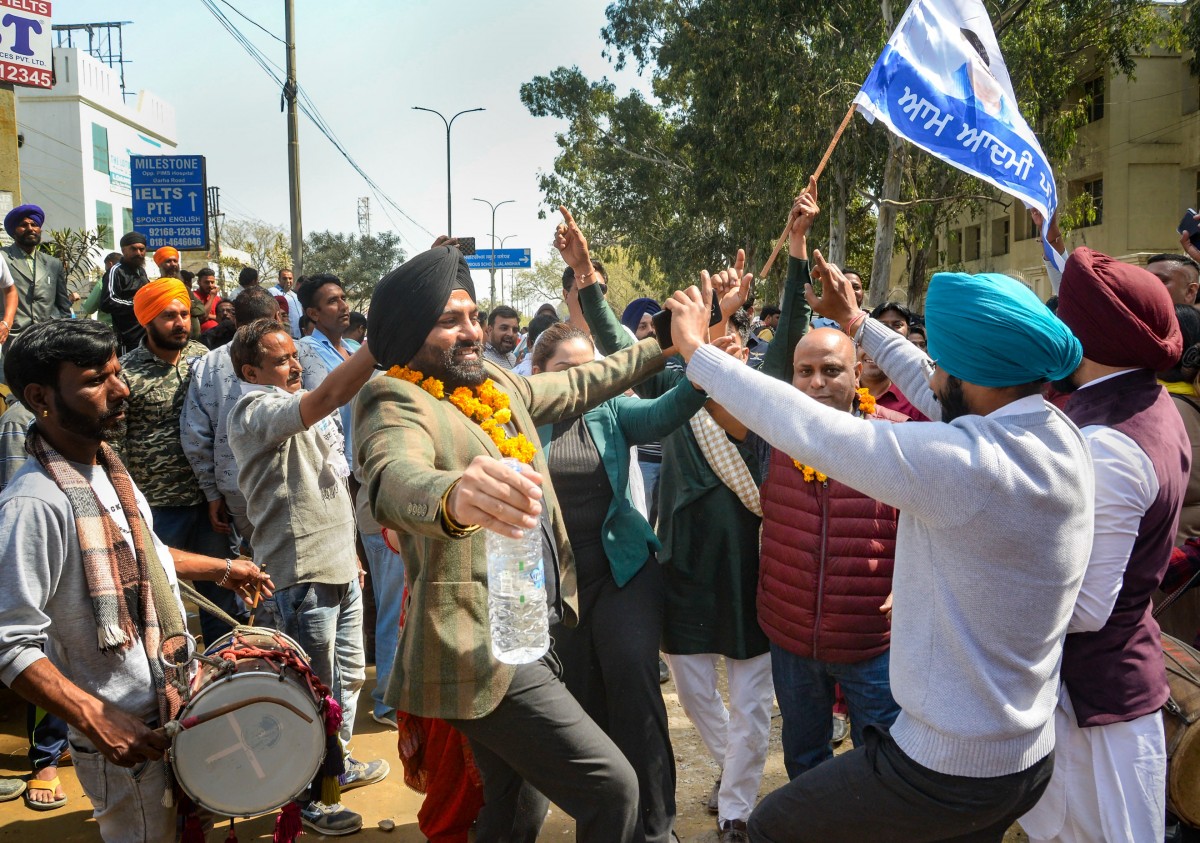 So, this is all down to the overwhelming mandate provided by the Punjabis that saw the AAP win all seven seats from Rajya Sabha. But, by selecting non-Punjabi and unworthy elites, it is clear that Delhi bosses have used Punjab’s historic mandate to serve their own interests.

The contributions and sacrifices made by many Punjabis to dismantle the traditional political establishment and embrace a new political alternative in the form of the AAP have been ignored and insulted. A political revolution brought about by the people of Punjab itself suffered a serious setback in its early stages.

AAP has talked a lot about following the ideals of Babasaheb Ambedkar and Shaheed Sardar Bhagat Singh. The AAP government led by Bhagwant Mann in Punjab has ordered to place the portraits of Bhagat Singh and Ambedkar in all government offices. Even Mann’s swearing-in ceremony took place at Shaheed Bhagat Singh’s ancestral village of Khatkar Kalan, not Raj Bhawan.

Bhagat Singh and Ambedkar had similar positions on the fight against exploitative systems and social justice. They outright rejected elitist and aristocratic organization and upheld the rights and dignity of the common man. Equality and freedom remained the cornerstones of their life and struggle.

But, the AAP nominations for Rajya Sabha of Punjab do not reflect any form of social justice or any adherence to socialist principles. On the contrary, elitism and capitalism have been rewarded.

By voting the AAA into power through a historic landslide mandate, the people of Punjab have shown immense confidence in their leadership. Every ordinary man in Punjab looks towards this new government with high hopes and aspirations. Indeed, the Punjabis have caused a political revolution and a new era of positivity has dawned.

Bhagwant Mann’s decisions to provide 25,000 government jobs for young people and to regularize the services of 35,000 contract employees in Groups C and D are very commendable. They are presented as reformist measures to revive Punjab. However, the appointments of Rajya Sabha emerged as a serious setback and in turn run counter to the AAP’s own ideology.

Punjab is a dynamic state. It has a history of strong resistance whenever rights have been denied. The Delhi-based leadership of the AAP should not abuse the power vested in it by the people of Punjab. Opposition from Punjab would not only be detrimental to the AAP’s fortunes in other states, but would also tarnish the party’s image domestically.

More importantly, AAP must realize that the portraits of Ambedkar and Bhagat Singh cannot be mere political symbolism.

Kanwar Deep Singh Dharowali is a political analyst based in Chandigarh.

A political issue? // The observer