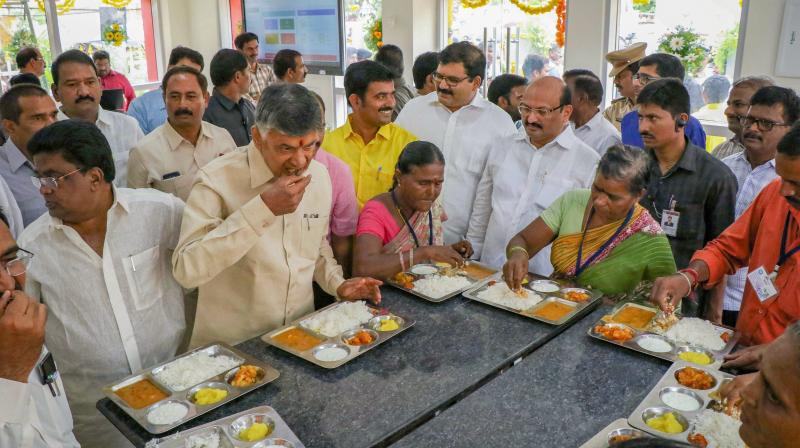 VIJAYAWADA: The opposition Telugu Desam, which has been continuously organizing protests and agitations in the PA against the YSRC government for the past three years, is now focusing its attention on the issue of Anna’s canteen in order to also draw a political advantage for the next elections.

TD executives plan to launch Anna canteens in all assembly segments to gain mass support. Local party leaders compete to launch Anna canteens. The ruling YSR Congress opposes TD’s occupation of roadsides on behalf of Anna Canteens, saying it causes inconvenience to the public. Clashes between YSRC and TD activists have been reported in some areas and this has turned into a big problem in the state.

TD Chief N Chandrababu Naidu promised to set up Anna canteens across the state in the 2014 elections but he forgot about it after winning the elections. However, the TD government opened these canteens a year before the end of its mandate. Even in 2018 as well, only 600 canteens were opened statewide. In each of them, food was offered to nearly 200 to 300 people a day at `5 per plate.

YSRC MP Alla Ramakrishna had opened a Rajanna canteen in Mangalagiri in 2017, offering food for `4, which received a good response and several other YSRC leaders later opened similar canteens to attract the masses. Today, the TD Opposition also runs Anna canteens providing food for 5 months and runs a negative campaign against the YSRC government for stopping TD welfare programs.

TD opened an Anna canteen in Mangalagiri where Nara Lokesh fought the 2019 election, amid rowdiness in which Anna canteen tents were removed twice. A similar incident occurred in Kuppam, the domestic segment of Chandrababu Naidu, where TD alleged damage to canteen tents by YSRC militants. Following this, Naidu squatted on the road in protest action.

Another rowdy over Anna’s canteen occurred on the main road in Tenali amid police denial of permission. The YSRC then attempted to organize competitive canteens and the police prevented both sides from operating canteens on the road.

Former minister and head of TD Nakka Ananda has claimed that TD will not hesitate to open Anna canteens across the state to feed the poor and will restart Anna canteens after winning the upcoming elections .