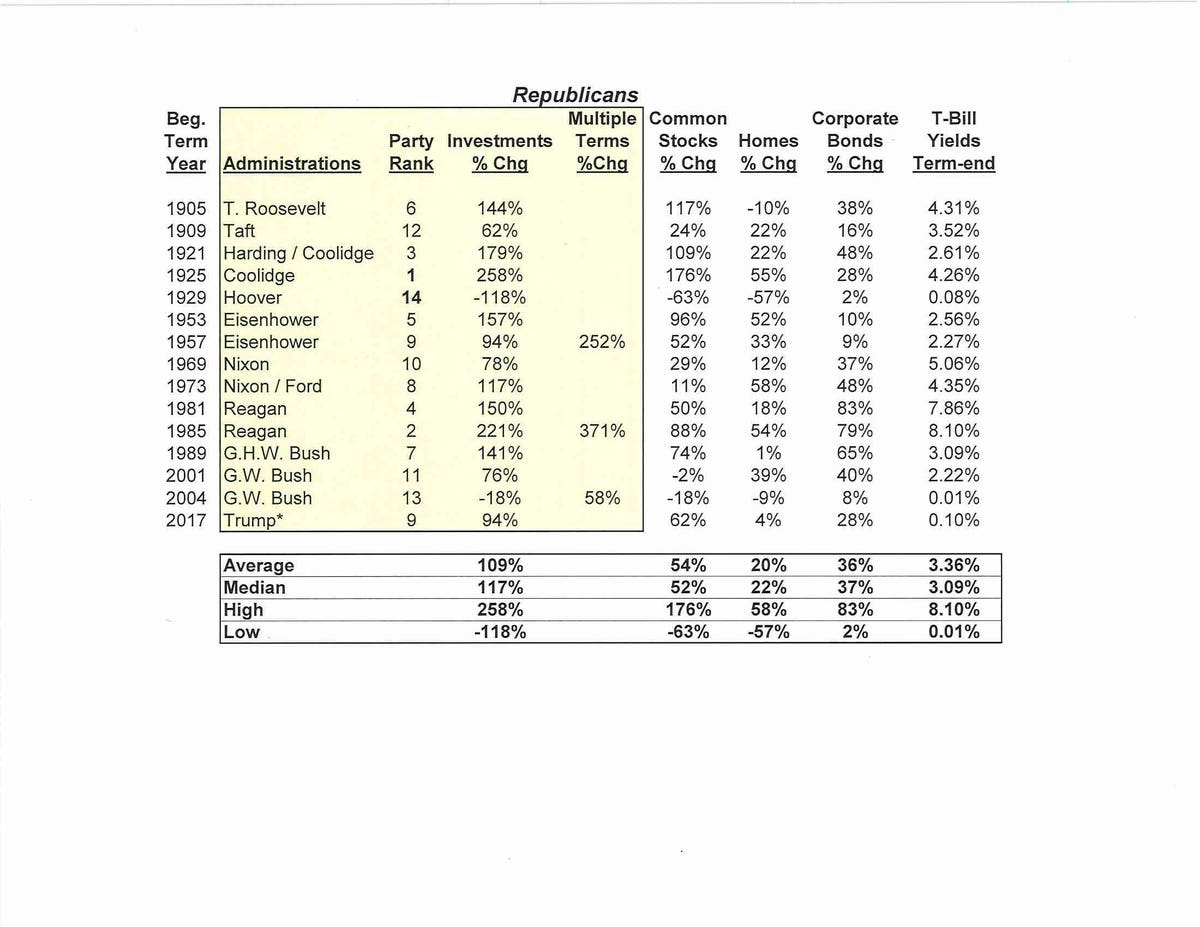 Are the winds of political change really having an effect on investment?

Since the beginning of our country’s history, many politicians (from opposing parties) have been wealthy and successful investors. Indeed, many parliamentary, senatorial and presidential campaigns were financed by the fruits of the successful investment of the candidate (or his family).

Ultimately, investors (regardless of their political views) want their stocks, bonds and real estate to appreciate in real terms.

You might not be surprised to know that both Reagan terms showed a 138% increase in stocks and a 72% increase in house prices and 162% in corporate bonds (combined return of 371%) , but the best term was the obscure Rutherford B. Hayes (1877-1880) when investments increased 369% in four years!

Contrary to popular belief in the business world, not all bull markets are generated on the Republican side. The best ROI for a Democrat was Clinton’s eight-year post-Cold War tenure of 263%. The 2nd best ever!

Obviously, the well-attended scandals of the Reagan and Clinton administrations did not matter to Wall Street!

On the other hand, both sides have had bear markets under scrutiny. Republican Hoover and Democrat Pierce recorded disastrous investment losses. Finally, no president has known the ups and downs of FDR. His administration made the lists of the best and the worst single terms.

What is clear is that voters’ patience with bear markets is limited and has not allowed a president to serve a second term with large investment losses.

Wall Street pays attention to the presidential election cycle. According to The investor almanac, “Since 1833, presidential elections every four years have had a profound impact on the economy and the stock market. Wars, recessions and bear markets tend to start or occur in the first half of the term; booms and bull markets.

Elephants vs. Donkeys, which is the best political party for investors?

With a controversial election unfolding in less than a month and both sides claiming to be better for the economy, it seems like now is a good time to look at the long-term investment track record of the presidential administrations of both parties.

Since 1900, the Republican presidential term has posted an average cumulative total return of 54% in stocks, 20% in house prices, and 36% in corporate bonds. Of the 15 Republican administrations, only 3 saw declines in inventory and house prices. See table A

Since 1900, the Democratic presidential term has posted an average cumulative total return of 60% in stocks, 25% in house prices, and 21% in corporate bonds. Of the 14 Democratic administrations, only one has seen stock market declines and two have seen house prices fall. See table B

Both sides can find statistics to claim victory. Republicans posted a higher average and median return on investment of 109% and 117%, but Democratic presidents posted a significantly higher average appreciation of stocks and housing due to Hoover’s disastrous tenure from 1929 to 1932. This which is clear is that 21st The presidents of the century have not matched the total investment results of their 20e predecessors of the century.

Who should investors pay most attention to: the President, Congress or the Federal Reserve?

Since asset values ​​are heavily influenced by changes in interest rates and taxes, investors should also keep an eye on the Federal Reserve and Congress.

The Federal Reserve and interest rates:

Historically, presidents have been lauded and blamed for the economy while the Federal Reserve keeps monetary policy out of public view. For example, Hoover is the popular choice to blame for the Great Depression of the 1930s while Federal Reserve Chairman Young is rarely mentioned for the Fed’s enormous role in the disaster.

Until President Volcker’s fight against inflation with 20% interest rates in the early 1980s, the public did not pay much attention to the Federal Reserve, and yet it can easily be argued that the actions of this body have the most direct effect on the investment world.

Wall Street and Main Street have a love / hate relationship with the “Fed”, and there have been times when they wanted to “tar and pluck” the chairman of the Fed and abolish the Fed!

Has America performed better economically with the Federal Reserve in the driver’s seat trying to control inflation and improve economic growth?

Yes! In fact, economic growth is more stable under Fed watch. Deflation is less common, but inflation still seems to be a lingering problem since the creation of the Federal Reserve in 1913.

The old adage “It’s not what you earn, it’s what you keep” really applies to investing and taxes. Taxes strongly influence the investments used, when profits and losses are made and the type of accounts used (taxable or tax-deferred). Over time, taxes come and go, and Congress enacted a complicated maze of investment-related taxes such as: income tax (with dividends taxed twice due to taxes paid by the company ), capital gains, inheritance taxes, penalties for early and late IRA withdrawals to name a few.

Income taxes were imposed permanently on American citizens in 1913 and have been increased and reduced 23 times. The highest tax rates ranged from 15% (in 1916) to 94% (in 1944). Capital gains tax varied from 7% to 39.9%. Indeed, there is a strong inverse relationship between the level of the capital gains tax rate and the performance of the stock market. In the mid-1930s and 1970s, this tax was over 30%, and the stock market was behaving miserably.

In today’s politically correct world, it’s safe to say that when it comes to economic mistakes, Washington DC has a lot to blame. Whatever the political ideals of every investor, everyone can agree that stable interest rates and fair tax policies that encourage investment are good for society.

So who should investors pay most attention to: the President, Congress or the Federal Reserve?