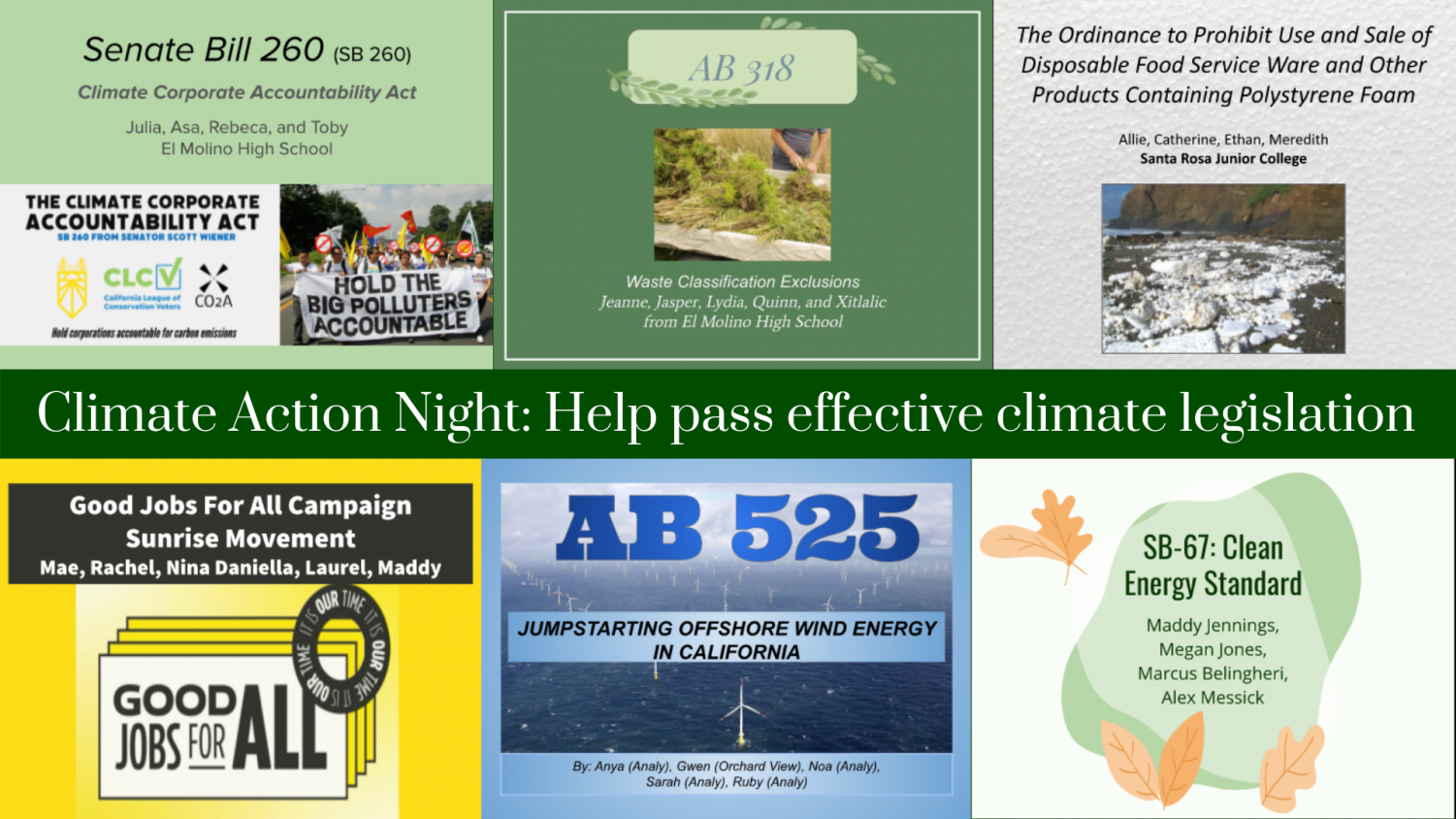 Sponsored in part by the SRJC Sustainability Committee and 350 Sonoma, a network of volunteer climate activists, the Thursday evening event drew a crowd of nearly 200 people to hear 12 presentations on as many ordinances and projects. who are moving through the California legislative process, and to learn how to contact county and state legislators to influence their vote.

The student presenters represented not just SRJC, but a consortium of climate-focused high schools and grassroots community groups, including the Sunrise Movement’s Sonoma Hub, Analy High School, and a delegation from UCLA who will be reproducing Climate Action Night l next year on their own campus.

Annette Lee, a sophomore at JC who plans to study marine ecology and advocacy at Sonoma State University, introduced the Coalition Against New Gas Stations (CONGAS), an all-volunteer group which lobbies on environmental and social justice grounds against new gas stations in Sonoma County. Since its formation two years ago, CONGAS has defeated three proposed gas stations in the county.

“I think it’s really important to talk about environmental and climate crisis issues,” said Lee, 18, “but I also think it’s even more important to take action and do what you can to have a direct impact on local and wider initiatives.”

Like Lee and his classmates’ CONGAS discussion, the other presentations were succinct and focused. Topics included the Clean Energy Standard, which requires 100% of California’s electricity to come from clean energy by 2045; AB-1276, which prohibits restaurants and third-party delivery services from providing single-use utensils to customers unless requested; and the Decarbonization Act of 2021, which requires all cities to decarbonize building plans to achieve carbon neutrality by 2045.

Climate Action Night historically takes place at the end of April to coincide with California’s legislative season, or when voters can have an outsized impact on the passage of bills.

“Right now all these bills are in committee, and then by May and June [the committees] finalize, and then they’ll get to that wave of votes in July,” said Abigail Zoger, SRJC Instructor and Co-Chair of Climate Action Night, explaining why it’s so important for Sonoma County residents to have their voices heard now. An email or call to your state representative could affect whether an important climate bill leaves committee for a vote in the fall.

“So right now is really the time when people’s voices really matter,” she said.

Zoger also pointed out that action is needed at the state and local level because while Californians consider themselves the most environmentally friendly Americans, state laws don’t always reflect our North American ethos. Californian.

“We think California really has it all figured out, but the most important company here, SB-467 [a bill that would have banned oil and gas production in the state and required a buffer between drilling sites and schools,] – he was killed in committee. And we think, well, California has it all figured out, right? But it’s basic, like ‘Don’t poison your public with your oil drilling,'” she said, lamenting that the bill failed before it even hit the ground.

Ani Fowler has been a part of Climate Action Night since its first iteration, when she was in 11th grade. Now a natural science major in her first year at SRJC, Fowler provided perspective on how the event has changed since its inception.

“It was so inspiring to see how many young people got involved, but also how much support grew for the event from community members and those at the legislative level,” she said. “The last two out of the three years that this event has existed has been online. Despite the challenges, the number of participants has grown tremendously, and this is a major sign of hope and empowerment for me.

The empowering message was clear, even from State Senator Mike McGuire, who recorded a special message for attendees.

“Those of us who have lived through these wildfires in North Bay, we know we can’t wait another second without taking action,” he said. “And thanks to you, we will get there. Through your organization, your mobilizing action. You give the crisis the seriousness it deserves. And like I said, thank you. Thank you for leading the way. Together we will get there. Let’s continue the fight. »

This fight is also taking place at the highest levels of the US government, where the Green New Deal is being debated.

In an effort to help pass this legislation, the national Sunrise movement has launched its “Good Jobs for All” campaign to demand that “Senators and Representatives do everything in their power to advocate for economic stimulus legislation.” which is investing $10 trillion in clean energy, transportation, housing, the care economy, utilities and regenerative agriculture,” according to Madeline Reddell, 16, a student at Credo High School and a member of Sunrise Sonoma County and Sunrise Sebastopol Youth.

Fowler and Lee also understand that the fight to mitigate climate catastrophe must happen on a large scale and on a small scale. Fowler was a member of Youth vs Apocalypse and spoke at events such as the Zero Waste North Bay Symposium and at a School Strike for Climate rally. On a personal level, Fowler’s family has removed their air conditioning system and opts to “just open or close our windows when needed.” She has been using the same reusable water bottle for two years.

Lee is poised and ready to implement what she learned at Climate Action Night when she calls her elected representatives. She also stays away from single-use plastics and avoids fast fashion shopping. Lee also believes in supporting local agriculture and going vegetarian or vegan – when possible – for its environmental benefits. His family composts at home.

For the three students, fixing the climate – reducing greenhouse gases, sequestering carbon in the earth, reducing the waste that ends up in landfills – is paramount to all other concerns.

“We live in Sonoma County, with our fires, and we see firsthand the effects of climate change,” Reddell said. “And it’s infuriating to be a teenager in this world knowing that the decisions that are made now, not just by politicians but by voters, are going to affect me for the rest of my life. Many of these politicians who take those decisions won’t have to live with that, but I am.