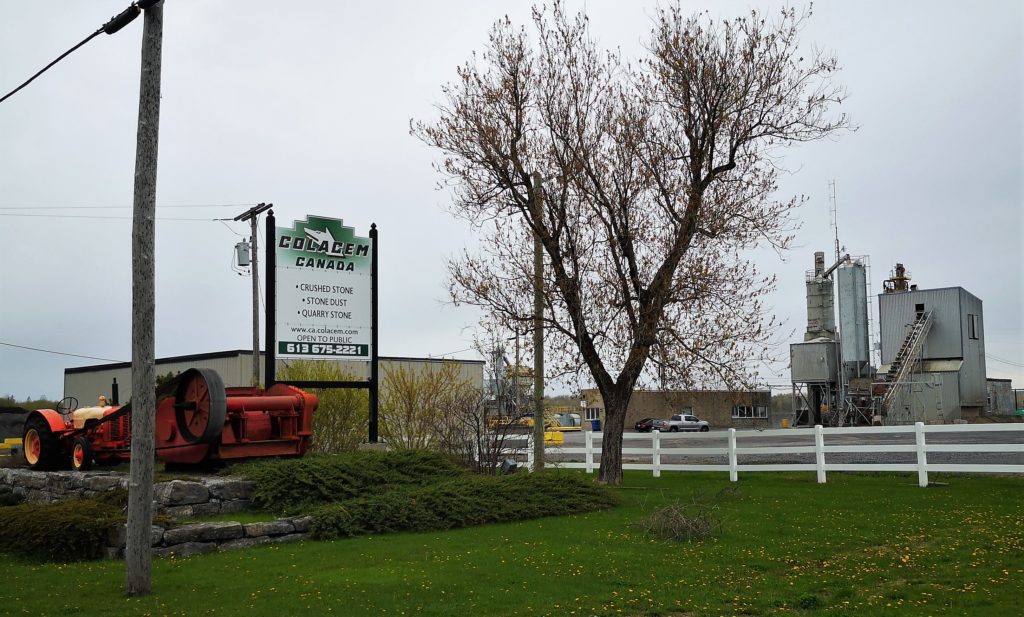 The Colacem cement project near L’Orignal is shaping up to be a political issue among local federal and provincial politicians.

On June 30, Superior Court judge Patrick Boucher dismissed Action Champlain’s request that the Town Planning Appeal Tribunal’s decision in favor of Colacem Canada’s project to build a cement plant adjacent to the quarry on the Highway 17 be appealed to Divisional Court. On July 4, Action Champlain suggested that citizens use the only option they have left to shut down the cement plant, which is to say that citizens write to the provincial Minister of Environment, Conservation and Parks, and the federal Minister of Fisheries and Oceans and argue that the cement plant would adversely affect local fish, wildlife and plant habitats.

Glengarry-Prescott-Russell New Democratic Party (NDP) federal candidate Konstantine Malakos has launched a petition to shut down the cement plant, and as a sign of what could be an issue in the election campaign likely to take place this fall , Malakos targets incumbent Liberal MP Francis Drouin.

The petition is available on the federal NDP website and a statement by Malakos alleges that Drouin said nothing could be done to stop the project at the federal level and wrote a letter to the editor of The Review on December 4, 2017. indicating that the federal government has no role to play in the cement industry file. In that letter, Drouin stated his personal opposition to the cement plant, but said he did not have the power to influence the decision and that the matter belonged to the former Ontario Municipal Commission, now the Local Planning Appeal Tribunal, to decide.

“I understand that some politicians may be persuaded to weigh in on issues of other jurisdictions, but as it stands, a federal MP who weighs on municipal issues barks without biting a bite,” Drouin wrote.

However, in a letter Drouin co-wrote with MPP Amanda Simard to the editor of The Review on June 22, there is no mention that the federal government has no jurisdiction to shut down the cement plant. The letter was first sent to Ontario Minister of Environment, Conservation and Parks, Jeff Yurek, asking him to revoke the provincial environmental clearance certificate for the plant.

Drouin and Simard attended the July 4 meeting and Drouin explained that the federal government can stop construction of the cement plant if there is scientific evidence to support fears that the facility could harm fish and d ‘other aquatic species in nearby waterways. The Minister of Fisheries and Oceans would use the evidence to issue a shutdown order.

The Malakos petition calls on the federal Attorney General to file an injunction against the cement plant project under the Fisheries Act, for a federal environmental assessment of the project, and that consultations be held with the Mohawk First Nation of Kanesatake (Oka) to achieve a “nation-to-nation” cement plant agreement between the federal government and Kanesatake under the protocols of the United Nations Declaration on the Rights of Indigenous Peoples.

Meanwhile, Stéphane Sarrazin, Ontario’s recently nominated Progressive Conservative candidate for Glengarry-Prescott-Russell, said he was working to learn about the cement issue ahead of the 2022 provincial election. Sarrazin, who is mayor Township of Alfred and Plantagenet and Reeve in 2021 of the United Counties of Prescott and Russell, said he was not involved in regional government when it approved the Official Plan amendment authorizing the cement plant in 2017.

“I know that will become one of my problems if he is elected,” he said.