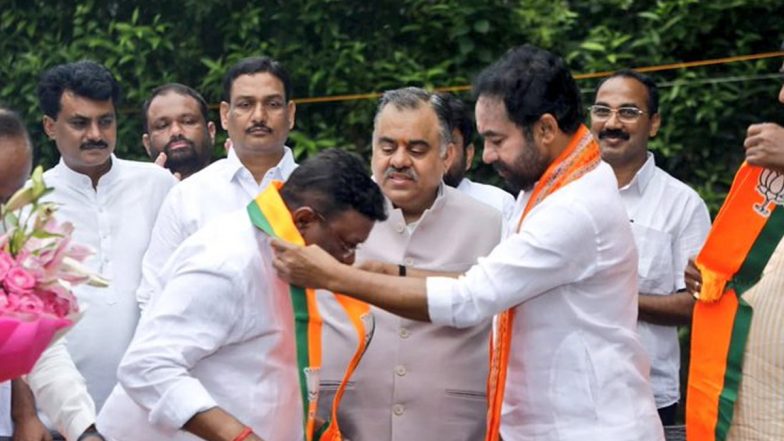 The former national spokesperson for the Congress party joined the Bharatiya Janata party in the presence of BJP General Secretary in charge of Telangana Tarun Chugh in New Delhi.

Tarun Chugh officially welcomed Sravan into the party by presenting him with the party membership card.

Sravan later told reporters that a political change was needed in Telangana for the development of the state. Ayodhya Development Authority list of illegal settlers includes BJP leaders.

He alleged that several Telangana Rashtra Samithi (TRS) leaders were behind casino organizer Chikoti Praveen, who was recently questioned by the Enforcement Directorate (ED) for alleged violations by FEMA.

Sravan said the TRS leadership was busy plundering the state. He alleged that TRS pushed the state into a debt trap.

“Now is the time to remove KCR from power,” he said.

Tarun Chugh said Sravan joined the BJP as he was attracted to the development work undertaken by the party.

He claimed that only the BJP can provide an alternative to the TRS.

Vivek Venkaswamy said that with Sravan joining his ranks, the BJP will be strengthened in the state.

Sravan announced his resignation from the party on Friday.

Alleging that there is a total mess in the party under the leadership of Telangana Pradesh Congress Committee (TPCC) Chairman A. Revanth Reddy, he said he is not ready to live like a slave in organization and therefore decided to resign.

He alleged that after Revant Reddy became CCP chairman, the party began prioritizing leaders based on caste and money power.

He said Revant Reddy threw all the principles of Sonia Gandhi and Rahul Gandhi to the wind in Telangana. He also blamed Congress official Manickam Tagore and strategist Sunil for the party’s current situation.

(The above story first appeared on LatestLY on August 07, 2022 at 3:12 PM IST. For more news and updates on Politics, World, Sports, Entertainment and Lifestyle , log in to our website latestly.com).