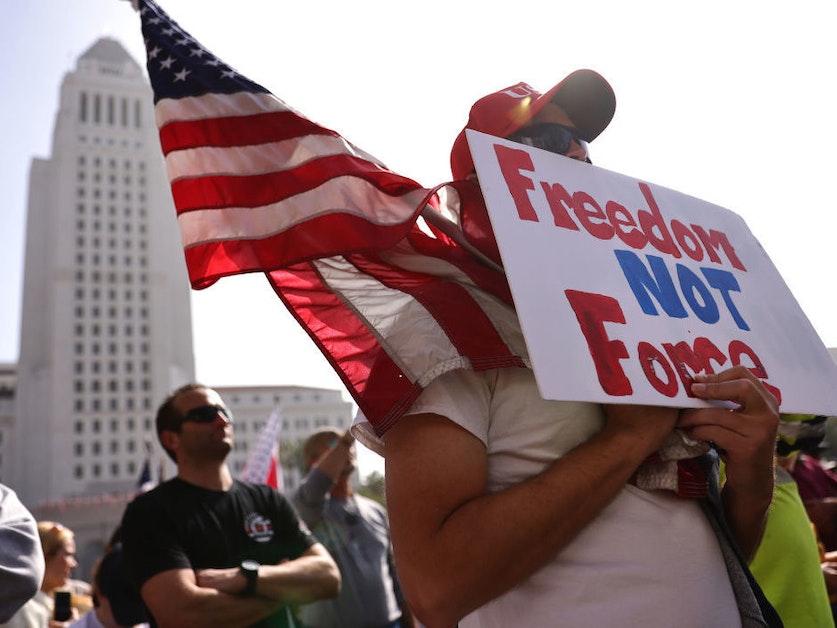 Do you feel like you don’t belong to one or the other political party? here’s why

Americans are divided not only by party, but also within them, enough that Pew ideologically classifies Americans into nine distinct categories (one more than its latest version Four years agowith decidedly different contours.)

Clear lines are emerging when it comes to race, inequality, and what the government should be doing about it. There were also decidedly different views on the role of government as a whole, economic policy, immigration, religion, the United States’ standing in the world, and – for Republican-leaning groups – the former President Donald Trump.

Moreover, although polls have found broad support for a third outside the top two, the study shows that there is no magic middle ground. In fact, the study finds that the three groups with the most self-identified independents “have very little in common politically.”

There are also clear implications for congressional scrutiny. Although there has been so much focus on Democratic divisions between progressive and moderate wings in Congress, the study finds there are more divisions between Republican groups on the issues. But where Republicans have an advantage is having a sense of urgency about who is in charge in Washington. The strongest Republican groups more than the strongest Democratic groups think next year’s midterm elections “really matter.”

The typology was created using more than 10,000 survey interviews over an 11-day period last July. A typical national survey has about 1,000 respondents. This is the eighth typology created by Pew since 1987.

Here’s an overview of Pew’s nine categories (to see where you rank, you can take Pew’s quiz here):

Conservative Faith and Flag (10% of the public)

Republican-leaning groups largely believe that the government is doing too much, that everyone has the ability to succeed, that the barriers that once made it harder for women and non-whites to advance are now gone, that Whites generally do not enjoy societal advantages over blacks, that political correctness is a major issue, and that military power is essential for the United States to remain a superpower.

Two-thirds also think the GOP should not accept elected officials who have openly criticized Trump.

However, they are divided on economic, social and foreign policy. Economically, there are differences over whether companies make a good amount of profit and whether taxes should be raised on the wealthy. They also don’t entirely agree on which is more important – the expansion of oil, coal and natural gas or the development of alternative energy supplies.

On social issues, they disagree on whether same-sex marriage or abortion should be legal, whether government policies should reflect religious beliefs, and even whether they feel uncomfortable hearing people speak a language other than English in public places. There are also differences about whether electoral changes that make it easier to vote would make elections less secure.

When it comes to foreign affairs, some think the United States should consider the interests of its allies, others don’t.

bias the oldest of the Republican-leaning groups

deeply conservative on almost all issues

very politically engaged; nearly 9 in 10 think who controls Congress after next year’s midterms ‘really matters’ – the highest of any group

only 15% of Republicans and Republican-leaning Independents

less restrictive on immigration than the other two GOP-leaning groups

more “globalist” – in other words, they believe that the involvement of the United States in the world and with its allies should be a priority

immigration hardliners, even more so than Faith and Flag conservatives

very critical of the American economic system; a majority believes that “the country’s economic system unfairly favors powerful interests, that corporations in this country make too much profit, and that taxes on household incomes over $400,000 should be increased”

strong Trump supporters; 4 in 5 would like him to remain a top political figure, and nearly 6 in 10 want him to run again

most do not identify as “conservative” politically, but are conservative economically, on issues of race, and in that they prefer smaller government

more moderate than other Republicans on immigration, abortion, same-sex marriage and marijuana legalization

lean toward the GOP, but don’t fall in love with it; nearly two-thirds would like Trump not to remain a national figure; and, in fact, a quarter identify with Democrats and Democratic-leaning independents

the only GOP-oriented group to say President Biden definitely or probably legitimately received the most votes in the 2020 election, and only about 4 in 10 think the results of the upcoming 2022 election “really matter”

the group that Hispanic Republicans are most likely to belong to

largely disengaged from politics; only around 4 in 10 people voted in 2020, and less than half think the 2022 election results ‘really matter’

While Democratic-leaning groups generally agree on many issues and say problems exist when it comes to racial and economic inequality, there is a gap in intensity about what needs to be done to address these issues. and how radical the solutions must be.

Pew notes that in past typologies it has found cracks among Democratic groups on social issues like abortion, same-sex marriage and marijuana legalization, but those no longer exist. Instead, the divides now center on how liberal the party is.

These Democratic-leaning groups believe in a strong federal government, which should do more to solve problems. They also agree that the economic system unfairly favors the powerful and that taxes on big business and corporations should be raised, as should the minimum wage (to $15 an hour).

They believe that more needs to be done to achieve racial equality, that non-whites face at least some discrimination, that significant barriers remain for women to advance, and that voting is a basic right and should not be not be restricted. When it comes to major foreign policy decisions, they agree that allies must be considered.

Cracks exist at the level of American military power and, to a lesser extent, social and criminal justice as well as immigration.

the largest Democratic group to say it backed the senses. Bernie Sanders or Elizabeth Warren in the Democratic primaries (although they broke strongly for Biden in the general election against Trump)

support for the Democratic Party and its leaders

when it comes to race, they say they recognize the ills of society and more needs to be done to correct them, but instead of wholesale change, they say it should come from existing laws and institutions

generally upbeat about politics and the country

28% Democratic-leaning groups, making it the largest of the Democratic groups

older, less likely to have a college degree than other Democrat groups

most identify as moderate

Black Democrats are concentrated in this group, although the group is the most racially and ethnically diverse of all groups

liberal views on race, economics, and the social safety net, but are more conservative on immigration and crime, and are mostly pro-military powerhouses

16% of Democrats and Democratic-leaning groups

the youngest of the Democratic-leaning groups

liberal, especially on issues of race, immigration and climate

less politically active than other Democratic groups, are less reliable voters, are more likely to identify as independents; when they vote they massively break the democrats

not thrilled with the Democratic or Republican parties — or the country as a whole, for that matter

most say other countries are better than the United States, and nearly 9 in 10 don’t think there are candidates who represent their views

only about half say 2022 election results ‘really matter’