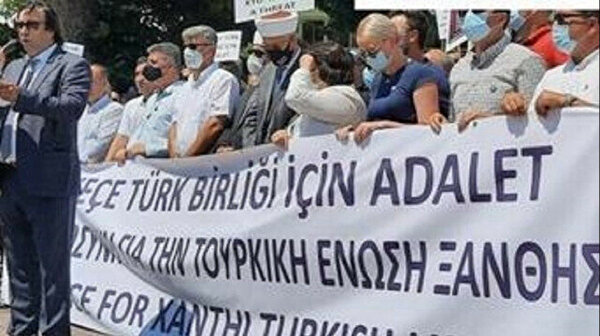 A European political party criticized Greece on Friday for a new investigation launched against a Turkish minority association which organized a march for rights in July.

The march of the Xanthi Turkish Union (Iskece Turk Birligi-ITB), one of the oldest and most influential associations of Turkish minorities in Greece, brought together thousands of people and personalities who protested against the fact that Greece had not applied the decisions of the European Union European Court of Human Rights (ECHR) favorable to the minority.

The European Free Alliance (EFA) reiterated on Twitter its support for the leaders of the ITB, summoned on Wednesday by the authorities.

“The unjustified repression of the Greek state against the Muslim Turkish minority in Western Thrace must end,” the party said.

He pointed out that the rights march was aimed at reclaiming official recognition of the ITB and reiterated that the ECHR had recognized the legitimacy of the ITB’s claims.

But the Greek government did not implement the ECHR ruling, he said.

“Greece should embrace diversity and recognize the Turkish Xanthi Union, as decided by the ECHR,” the EFA said.

-Decades of struggle for rights

Under a 2008 ECHR ruling, the right of Turks in Western Thrace to use “Turkish” in the name of associations was guaranteed, but Athens did not enforce the ruling, effectively banning the identity of the Turkish group.

The Greek region of Western Thrace is home to a Turkish Muslim community of approximately 150,000 people.

In 1983, the nameplate of the Turkish Xanthi Union (Iskece Turk Birligi) was removed, and the group was completely banned in 1986, on the grounds that “Turkish” was in its name.

To implement the ECHR ruling, in 2017 parliament passed a law allowing banned associations to apply for re-registration, but the legislation provided for major exceptions that made applications more difficult.

UP The murder of a woman becomes a political issue for Akhilesh Yadav. He says…