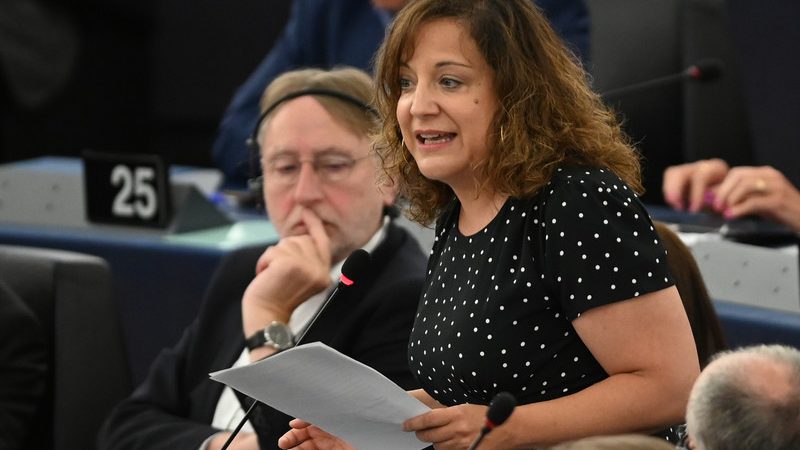 Political change is needed in Greece after it was discovered that the phone of socialist opposition leader Nikos Androulakis had been tapped by the national secret service, says Iratxe García, leader of the Socialists and Democrats in the European Parliament , at EURACTIV.

The scandal, which hit the headlines at the end of July, sparked strong reactions in Athens and tested the conservative government of Greek Prime Minister Kyriakos Mitsotakis.

Since then, the head of Greece’s intelligence services and the head of Mitsotakis’ office have resigned, but the government maintains that the prime minister was unaware of the scandal. This denial was hard to believe for some, because the first law passed by the Prime Minister was the one that placed the secret services under his personal jurisdiction.

“According to the latest developments, it seems quite clear that Prime Minister Mitsotakis owes strong and clear explanations to Greek citizens and parties about his knowledge and responsibility in this scandal,” García said.

“This is also why our sister party in Greece has already called for the creation of a special commission of inquiry to determine any form of responsibility,” she added.

This week, an extraordinary meeting of the Greek Chamber is scheduled for the Conservative government to explain why the secret services tapped the socialist leader’s phone.

Further revelations are expected on August 24, when the new Secret Service chief hinted during a parliamentary session that other politicians or journalists could have their devices tapped by the Secret Service.

“I have had full control of the secret services for 15 days, a priori no one is exempt [from bugging]“, he said without further details.

For the Spanish politician, at EU level, a national intelligence service illegally tapping the phone of an opposition leader and MEP is “a violation of the rule of law and the principles of democracy enshrined in our Treaty”.

“There could also have been a breach of Mr. Androulakis’ parliamentary immunity, which is essential to guarantee the independence and integrity of the European Parliament as a whole. This is why I called on the President of the European Parliament to urgently ask the Greek authorities to undertake a thorough investigation and to disclose the reasons for the surveillance,” she said.

A difficult end for Mitsotakis?

In Athens, all progressive opposition parties condemned Mitsotakis for the scandal.

The main opposition, the left-wing Syriza party and the Pan-Hellenic Socialist Movement (Pasok) adopted a common line. Many suggest this could be a taste of a progressive government after the next general election.

The next elections are expected in a year; however, pressure is mounting on Mitsotakis to resign and call for a snap election.

Asked if this incident could bring Syriza and Pasok closer to a coalition government, García answered.

“It is not my role to engage in domestic politics or to anticipate scenarios after national elections. What is clear to the European progressive family is that Greece needs political change led by the Panhellenic Socialist Movement (PASOK)”.

The European Commission’s official position was reported by EURACTIV on 27 July, when a Commission spokesperson said: “Any attempt by national security services to illegally access the data of citizens, including journalists and political opponents, if confirmed, is unacceptable”.

But the European People’s Party, to which Mitsotakis’ New Democracy party is affiliated, and European Commission chief Ursula von der Leyen – also an EPP member – have remained silent on the issue.

However, von der Leyen and EPP leader Manfred Weber issued statements during this period congratulating the government on the end of the EU surveillance mechanism for the Greek economy imposed several years ago as part of the rescue plans.

An EPP source, who spoke to EURACTIV on condition of anonymity, said Mitsotakis was “lucky” as the scandal came to light in mid-summer.

The same source added that New Democracy is considered the strongest EPP member currently in power in Europe, and therefore political support from the EPP leadership is to be expected.

“They won’t be firing on their last stronghold,” the source said, adding that the scandal could affect Mitsotakis’ personal ambitions to seek an “international role” in his political career after leaving the prime minister’s office.

A Jordanian influencer sheds light on a social and political issue…

A call for political change