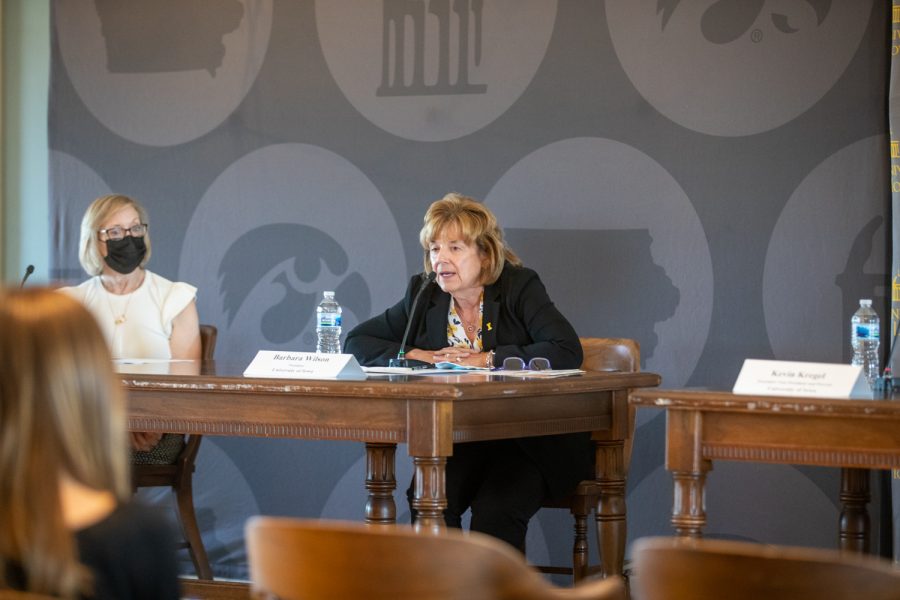 UI COVID-19 policy is indeed a political issue that pits those in power against those who are not.

“It’s not a political issue. It’s a health issue,” University of Iowa President Barbara Wilson said at a COVID-19 news conference Aug. 16. It comes weeks after the Centers for Disease Control and Prevention issued new guidelines that said masks should be worn indoors by everyone, including those who have been vaccinated, in counties labeled as “high” transmission or “substantial” —– a category Johnson County (alongside the majority of Iowa counties) falls into starting Aug. 16, before move-in week.

Wilson declares this distinction between health and politics in response to a question about mask and vaccine mandates, measures currently taken by other major schools but prohibited by Iowa Governor Kim Reynolds, and therefore simply “encouraged” by him.

But what does it mean for something to be a health issue, not a political issue? Who benefits from marking such a division?

The “politics versus health” comment came before Wilson explained that if everyone did their part and came together as a community, we could all have a great year. In other words, Wilson encourages us not to let our “political” differences divide us, but rather to realize that we are “all in this together” in tackling this “health issue.”

His use of the word “politics” describes individual identity and belief. In this case, the “politics” divide is the conflict over whether to wear a mask and get vaccinated (if possible). Wilson’s commentary divides students and workers on these grounds: pro-mask/vaccine versus anti-mask/vaccine. In this version of reality, Wilson and other administrators are the peacemakers, urging people on campus to overcome their “political” divisions for the sake of common health.

But this is a very narrow vision of the word “politics”. More broadly, this word describes power systems that make decisions about how resources are allocated and what rules everyone must follow.

Wilson is wrong: it is a political question. But it’s not in his interest to say so.

Many policies could be put in place now to mitigate transmission and harm on campus and in this community –– a mask mandate; a vaccination mandate (for those for whom it is medically advised); online course and employment options; hazard pay for workers; Internet allowances; reduced tuition and waived fees; among others.

In the immediate term, this is a political issue because those with local institutional power – like Wilson, other UI trustees, and the board – have the power to prevent the next wave of COVID-19 on campus and the illness and hardship that another pandemic semester will bring.

– Hannah Zadeh, graduate student at the University of Iowa