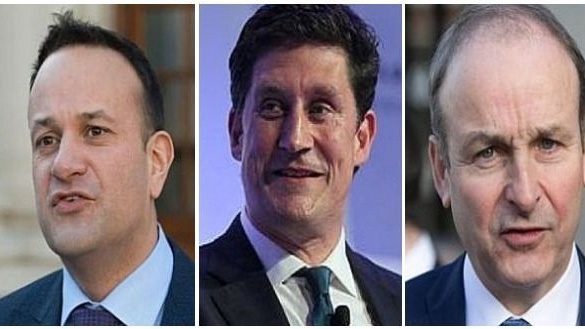 If Covid is not a political issue, the health service

A week upside down in politics that gave us three beacons for the immediate political future and a warning on how we behave.

The first sign was Covid’s announcement on Monday that the restrictions would be lifted – let’s call it the release of nightclubs – despite the situation worsening with the number of daily cases and hospitalizations. It points to a future in which Covid continues to be a daily issue for the government to deal with; instead of disappearing, the pandemic is going to be here for a while.

But it also shows that the government has passed a very important judgment on its handling of the pandemic: that it can withstand a consistently high level of cases for the next period. This is based on the expectation that the current wave, as TÃ¡naiste Leo Varadkar said in Brussels on Thursday, is an “unvaccinated pandemic”. Although ministers do not put it in those terms, it also assumes a bearable level of death. I’m not sure anyone wants to get into a debate on what exactly this level is, but sure enough it means.

They rightly shouted about other things, but they didn’t object to the reopening

Although they did not specify it as such, the main opposition parties did not oppose the measure. They rightly shouted about other things, but they didn’t object to the reopening. This suggests to me that Covid – although back as a daily issue in the news cycle – will not be a matter of political contention. This is an important distinction. There was a time in the spring when the opposition was moving towards the zero Covid option and thus creating a political dividing line on the pandemic. (Labor and Social Democrats did so explicitly, even though the Sinn FÃ©in was too cute to nail its colors to the mast.)

But as the vaccination progressed, they withdrew from that position. Now we’re back with almost everyone for the general direction of government policy on Covid. Paradoxically, this makes it more difficult for the Coalition to generate any political capital from its handling of the pandemic when it is successful – as we have seen – although this certainly does not prevent it from being blamed if something goes wrong. , as we did. also seen.

But if Covid won’t be a political issue, the health department will. In fact, the main health problem for the next few months may not be Covid at all – but hospital overcrowding, pressure on emergency departments and waiting lists. This week, figures from the INMO trolley watch returned to the news, approaching the 500 mark. This is the second indicator panel.

There is something bordering on a grim foreboding within government about the looming winter in state hospitals. The Covid will make the problems worse. Health service sources tell me that elective procedures have already been canceled. Health Minister Stephen Donnelly is set to launch a waiting list initiative in the coming weeks. He better hope it works, but with the numbers on the lists set to hit a million in the next few months – and you’ll hear that number a lot, trust me – he’ll need a magic wand.

The third panel in a report by Harry McGee earlier this week. He underlined the difficulties in finding an agreement between the Coalition parties – in reality between Fine Gael and Fianna FÃ¡il on one side and the Greens on the other – on the next climate action plan, expected in early November. . There will be many points of friction between the parties on the climate action plan, but none will be more thorny than the reduction of greenhouse gas emissions by the agricultural sector. Farmers, who see their livelihoods threatened, are preparing for a fight and this will put the rural TDs of Fine Gael and Fianna FÃ¡il in a very difficult position.

Line them up together and the three signs all point to a very difficult fall and winter for the coalition.

This week’s warning came from the murder of British Conservative Party MP David Amess, stabbed to death while running his constituency clinic. If such an event seems terrifying to us but distant, we must face the fact that the political debate on social media has become vicious and personalized. Usually, but not always on condition of anonymity, people routinely utter the most vile abuses, threats and slurs at politicians – especially, of course, at female politicians.

It is increasingly common to dismiss political opponents as not simply bad in their political approach.

Your timeline is not the country, but crass and ugly debate will spawn politics that look like it – and the pungent tone of political debate on social media is gradually seeping into national discourse. It is increasingly common to dismiss political opponents as not only bad in their political approach, but personally morally compromised, selfish, mean, mean and callous. It is not very difficult to see where this road leads.

This leads to gangs of people gathering outside Leo Varadkar’s house, shouting homophobic slurs. This makes smart young people interested in politics and public service afraid to run for office. This leads to driving women out of politics.

The strong polarization of UK and US politics – the two systems we know best – should serve as an example of how not to manage our public and political debates. To be a politician in the United States and the United Kingdom is now risking mortal danger.

Politicians from all parties here, especially those whose supporters are more inclined to behave online than others, may seek to civilize the debate now. They can say loud and clear that it is not okay to abuse, insult and vilify political opponents online. They can say that people of good will can differ on matters of politics. They can say their opponents might be wrong, but they’re not bad people. Or we can just continue on the road. But don’t let anyone say they don’t know where we’re all going.

Why not have a political party reserved for women? It will have four advantages