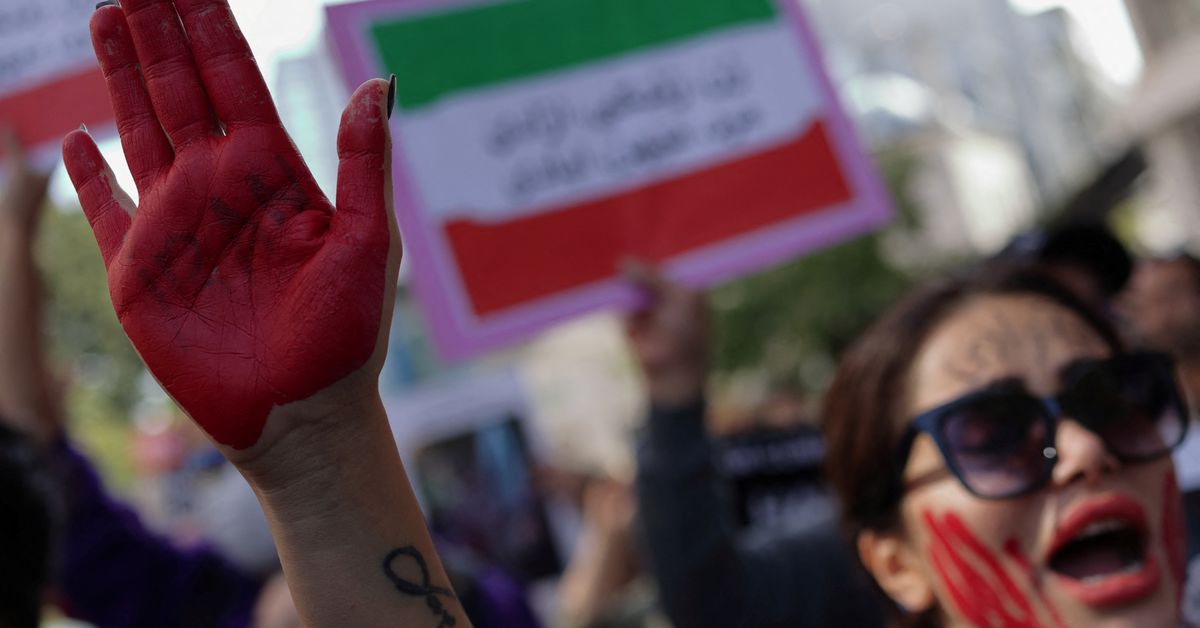 DUBAI, Oct 12 (Reuters) – Like millions of other Iranian women, retired teacher Somayyeh was suppressed by the country’s harsh Islamic laws for decades but was too scared to stand up to the ruling clerics – until the death of Mahsa Amini in police custody last month. .

The women were at the forefront of protests that erupted at Amini’s funeral and spread across the country, posing one of the greatest challenges to the Islamic Republic since the 1979 revolution. after

As analysts say the chances of political change in Iran are slim, Amini’s death has become an unprecedented rallying point for women, who are taking colossal risks to fight for freedom, calling for the fall of the cleric in power in a male-dominated society.

“Her death broke the camel’s back. It is the result of years of repression against Iranian women,” Somayyeh said. “We are tired of discriminatory laws, of being seen as second-class citizens… Now we want political change.”

“I can’t live with the fear that my daughter too could fall victim to the morality police and be killed by them… Mahsa’s death has shown that we must fight against this establishment.”

The mandatory dress code tops a long list of grievances of Iranian women, who make up more than half the population and are among the most educated in the Middle East. They have a literacy rate of over 80% and make up over 60% of Iran’s university student body.

But under Iran’s Islamic Sharia, imposed after the revolution, men can divorce their wives much more easily than women, while custody of children over the age of seven automatically goes to the father.

Women, including lawmakers and senior officials, need their husband’s permission to travel abroad. Their testimony as a legal witness is worth half that of a man, and daughters inherit half of what sons do.

Women can legally hold most jobs, vote or drive, but they cannot run for president or become judges.

The pressure on women has grown since hardline President Ebrahim Raisi’s victory in a tightly controlled race last year that tipped the balance of power away from the restraining influence of liberal politicians.

Raisi’s enforcement of the “Hijab and Chastity Law” in July led to more restrictions, such as banning women from entering certain banks, government offices and some modes of public transportation.

The number of morality police vans has increased on the streets and videos on social media show officers beating and pushing women while detaining them.

This has angered many Iranians, who believe they deserve to live in a free country and enjoy the rights enjoyed by others around the world.

“It’s not about the dress code anymore. It’s about the rights of the Iranian nation. This is about a nation that has been held hostage by the clergy for decades,” said Nasrin, 38. years, from the central city of Yazd.

“I want to live as I wish. We are fighting for a better Iran without clerics running my country.”

Security forces violently clashed with protesters, killing more than 185 of them including at least 19 minors, injuring hundreds and arresting thousands, according to rights groups.

Iranian authorities say at least 20 members of the security forces were killed in the “riots”.

“I grew up in Iran dreaming of living in a free country, where I can sing freely, dance freely, have a boyfriend and hold his hand in the street without fear of the morality police,” said Jinous, 27. years, freelance translator.

“I’m not scared at all. We go to protests with my mum and sisters to say ‘enough’.”

Blaming foreign adversaries as the source of the unrest, clerical leaders say women are better protected in Iran than in the West, where women are used as tools to advertise products and satisfy “sexual needs”. disorderly and illegal”.

“Compulsory hijab is the weakest pillar of the Islamic Republic. That’s why the regime is really afraid of this revolution,” said Masih Alinejad, an Iranian-American activist based in New York.

Waves of protests against the hijab have hit the clerical establishment in recent years. In 2014, Alinejad launched a “My Stealthy Freedom” Facebook campaign, where she shared photos of unveiled Iranian women sent to her.

This was followed by a campaign in 2017 for women to wear white headscarves on Wednesdays and hijab protests in 2018, when women took to the streets holding their veils up in the air. Dozens of people have been jailed for their anti-veiling activism, rights groups say.