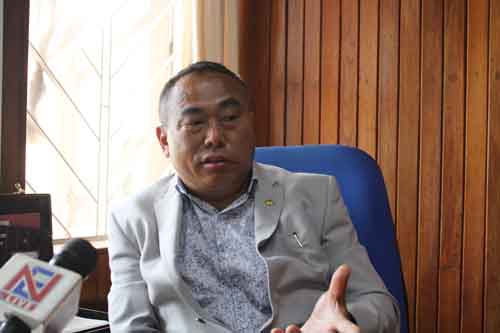 Our correspondent
Kohima, July 7 (EMN): The Naga Political Question Parliamentary Committee will hold a meeting with all elected members and the two Members of Parliament (MPs) on July 16 at the Nagaland Legislative Assembly (NLA) Conference Hall.

This was briefed by the Minister of Planning and Coordination, Land Revenue and Parliamentary Affairs, Neiba Kronu, who is also the member secretary of the Parliamentary Committee on the Naga Political Question following a meeting of the central committee held Thursday at the Chief Minister’s residential compound in Kohima.

He maintained that the July 16 meeting, which will not be an Assembly session, will be a serious discussion and will be held after the mock Indian presidential election, which is due to take place.

Kronu said 15 members were present for the central committee meeting on Thursday.

“At the moment the discussion is a bit behind schedule, so we think they should get closer and we will have a discussion on that day (July 16), the position of the central committee will also be discussed on that day” , said the secretary of the members.

Asked about the position of some civil society leaders in favor of the idea of ​​a third-party intervention in the talks as an observer, Kronu said the issue was not discussed at Thursday’s meeting because it was only a “brief discussion”.

The Conversation: What motivates political party donors in New Zealand?