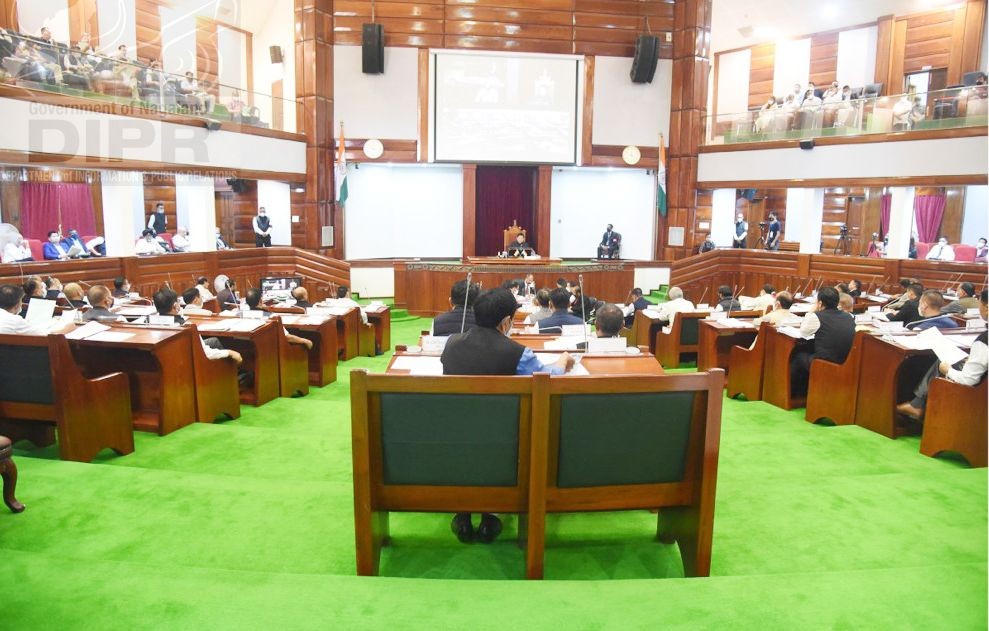 The eighth session of the 13th NLA underway in Kohima on August 3. (Photo DIPR)

Joining the hour of discussion on the Naga political issue, Minister of Disabled People (Housing and Mechanics) Tongpang Ozukum said on Tuesday that members of the Nagaland Legislative Assembly (NLA) are doing their part as facilitators and will continue to do so.

“We are determined as before with more confidence in each other and with this enthusiasm we hope and believe that we will once again give a strong impetus and concerted effort so that we can all see the final inking of the solution.” , said Ozukum. during the hour of discussion on the political issue of the Naga at the 8th session of the 13th NLA on August 3.

Ozukum told the House that as early as the first NLA Assembly in 1964, the House passed resolution after resolution approving and supporting the demand made by the negotiators.

“In order to show our commitment and seriousness to this political issue, this August Assembly reiterated the previous resolutions adopted in 1964, 1970, 1994, 2003, 2015 and the resolution adopted at this 13th Assembly,” Ozukum said. .

The minister indicated that in all the resolutions, the deputies had shown their solidarity with all the political groups for the sacrifices they had made since the beginning of the movement.

He also estimated that the 60 members of the ALN are still talking about the political issue of the Naga but that “there is no political will”.

Azo stressed the need for political will from all, including negotiating parties, and that they should conclude the talks in the interests of the Nagas.

He said the Indian government and lawmakers need to be bold enough to challenge the 7 NNPGs and the NSCM (IM) and bring them to a roundtable and allow them to see the skills or clause that the GoI is offering them.

Azo asserted that any Naga political group that does not want to sign, or that cannot sign, should also be courageous enough to repeal the ceasefire.

‘Golden opportunity’
Councilor for Tourism, Art and Culture, Khehovi Yepthomi, said that when the central government shows interest in finally settling the decades-old Indo-Naga political problem, “we should not miss the opportunity by gold “.

The more we continue to prolong the talk, the more dark days we may encounter in the days to come. The more we neglect the rhetoric, the more new political groups could appear, he said.

In addition, Yepthomi called on members to sincerely continue to play their role as facilitators and called on different Naga political groups to sit around the table and resolve all their differences for the good of the Naga people and unite for the final political settlement.

“A last joint effort”
MP Yitachu said that even though the House deals with the issue as an active facilitator, time and again, due to political stripes and political interests, “we tend to misunderstand each other and create divisions. between us”.

Yitachu said that by next year the election fever will start and it will be difficult for members of the House to come together to find a solution.

Conveying the desire of the NPF party that the House make a “last concerted and united effort” to facilitate the solution, Yitachu endorsed the idea of ​​an unopposed government.

“… This is a working story, an opposition party that fully supports the House / House leader to give the Naga solution a final push,” he said.

Additionally, Yitachu expressed confidence that bringing all 60 members together will create an impact that will reach the GoI.

He said the Central Committee on behalf of the Parliamentary Committee on the Naga Political Issue should meet with the central leaders and urge them to be magnanimous on the issue.

The central committee must also meet with tribal bodies, including women and student leaders, so that the desire for a solution becomes a mass movement, Murry said.

He also called on the churches to get involved in order to give a spiritual and emotional impetus towards a solution.

Imkong calls for “flexibility”
MP Imkong L Imchen said the GoI was bold enough to sign the 2015 framework agreement on August 3 as an official document for both the NSCN (IM) and the GoI.

While observing that the negotiating parties have an ‘uncompromising rigidity’ and that there is no flexibility or give and take on either side, Imchen added that: “The talks are almost at a standstill. Neither party shows any sign of flexibility or compromise. Both sides show more rigidity than flexibility.

He felt that the NSCN (IM) and GoI must compromise “if they are serious about the settlement because there is surely an underlying solution”.