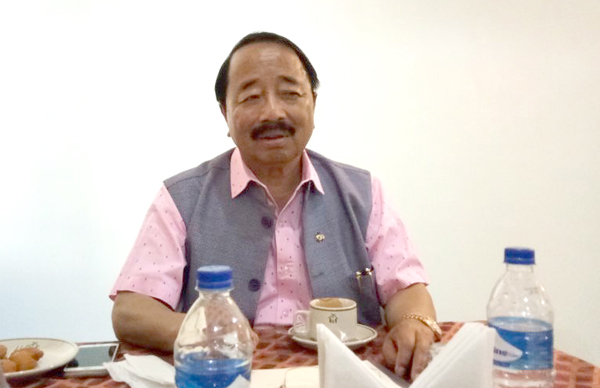 Our correspondent
Kohima, March 22 (EMN): Naga Popular Front senior lawmaker Imkong L Imchen said on Tuesday that invoking Article 356 of India’s Constitution which relates to the power of the president could be the right answer to the ‘cries of the Naga people’. .

He said this while initiating the discussion on the “Naga Political Question” on the third day of the ongoing 11th Session of the 13th NLA under Rule 50 of Business Conduct.

He said that even after forming a multi-party government, the house constituted the central committee on the Naga political issue made up of the National Democratic Progressive Party (NDPP), the Bharatiya Janata Party (BJP), the Naga People’s Front (NPF) and of the Independent, with the chief minister as convener and Dy. CM Y Patton and NPF Legislative Leader TR Zeliang as co-hosts.

“However, the committee was unable to discuss core issues by providing quality time for members,” he added.

In the process, he said time was weighing on the Naga’s enthusiasm for a negotiated settlement.

Imchen pointed out that it has now been 25 years since the political talks began and yet there is no sign of progress in the negotiations.

The lawmaker said during the 2018 general election that there was a concerted effort to suspend the impending Nagaland Legislative Assembly (NLA) election under the slogan “Solution not election”. He said another slogan came from a certain national party – “Election for a solution” – and that afterwards the election was held “according to their wish”.

He pointed out that five years have passed since then, “and yet nothing is in sight either from the Indian government or from the Naga negotiating groups”.

Imchen said, “If the maintenance of the electoral system in the state makes a negative obstacle to the ongoing political negotiation, the Government of India can even invoke Article 356 of the Constitution of India after the completion of the current term. in 2023 in order to eliminate any negative obstacle coming from elected officials”.

He felt that the house could be kept under lively suspension or even dissolved and imposed on the rule of the presidents to conduct quick negotiations and reach a negotiated settlement at the earliest.

“In the given situation, I am proposing to the Government of India to invoke Article 356 of the Constitution of India out of sheer frustration with the conduct of political negotiations over the past 25 years,” the senior lawmaker said.

He also said, “Let there be no elected representatives in the Naga political talks arena, only the negotiating parties and the GoI. The Naga people can no longer bear the burden of massive extortion inflicted on the people without any reasonable limits apart from intimidation and threats”.

During this time, he also claimed that too much innocent blood had been shed with untold stories of atrocities committed by both security forces and Naga freedom fighters.

Furthermore, he reiterated that he is not against democracy but against the dominant Naga society “which is full of violence, intimidation, extortion, threats” and felt that invoking Article 356 of the Indian Constitution might be the right answer.

Ministry of the Interior: RoS rejected SAINS’ candidacy to become a political party because the Constitution was not in order | Malaysia