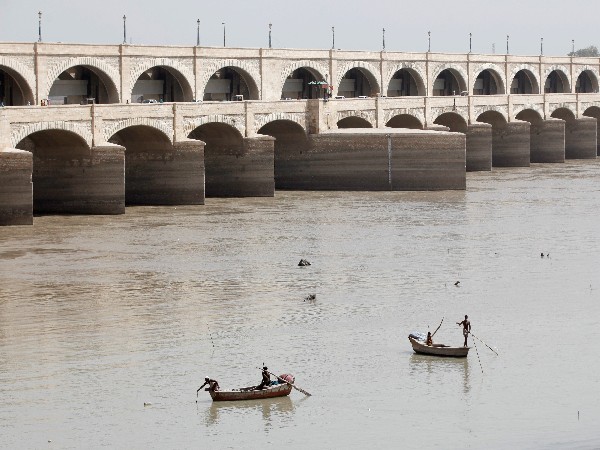 Sind [Pakistan]July 1 (ANI): Pakistani political party Jiye Sindh Quami Mahaz (JSQM) held rallies in parts of Sindh to protest against water shortage in the province, local media reported.
On the occasion, the leaders, while addressing the gathering, said that Punjab was conspiring to dry up the Indus. They also lamented that Punjab has never complied with the 1991 water supply treaty.
The protesters also said that elites associated with the Pakistan People’s Party (PPP) in Sindh continue to get water, but others, without any influence or political connection, are suffering from the unavailability of water. .
The protesters demanded that the water shortage in Sindh be immediately solved by releasing water in Sindh.
Water scarcity in Sindh has been a big problem. Not only Sindh province but also Punjab province are facing water shortage of up to 75%. Punjab province provided 53,100 cusecs of water against its requirement of 1,27,800 cusecs on Thursday.

According to data shared by the Punjab Irrigation Department, the Taunsa Dam provided only 6,700 cusecs. This is 73% less than his demand of 25,000 cusecs. In addition, the Thal Canal faced a 75% shortage, as 2,000 cusecs of water was poured into it against a need of 8,000 cusecs.
The Panjnad Dam was also operating with a 66% shortage, receiving 4,300 cusecs against the required 12,700 cusecs. Rasul Barrage was 59% water stressed with a supply of 9,900 cusecs against a need of 24,200 cusecs.
The Sulemanki dam and the lower Bahawal canal each faced a shortage of 54%, the Sidhnai dam at 51%, the Islam dam at 50% and the Trimmu dam at 43%. There was a 33% water shortage in the Mailsi Canal.
A severe water shortage, coupled with a blistering heat wave, has sparked tensions between Sindh and Punjab in Pakistan over their share of the country’s water resources.
The three dams in Sindh, Guddu and Sukkur dams in upper Sindh and Kotri dam downstream experienced 61% water shortage in Indus water.
The water in the Tarbela dam and the Taunsa dam above Guddu is still at dead level. According to water figures, the inflow of water from the Indus to Tarbela was 89,400 cusecs, while the outflow at the dam was 88,600 cusecs. The water inflow to Kalabagh was 79,387 cusecs, while the discharge was recorded at 76,387 cusecs.
According to the river water data, the outflow into the Indus River water was 81,814 cusecs at Taunsa Barrage, while the outflow was 74,422 cusecs. The inflow of water from the river to Guddu Dam was recorded at 55,628 cusecs, while the outflow at the dam was 46,266 cusecs. (ANI)

Financing transport should not be a political issue | Grayson County