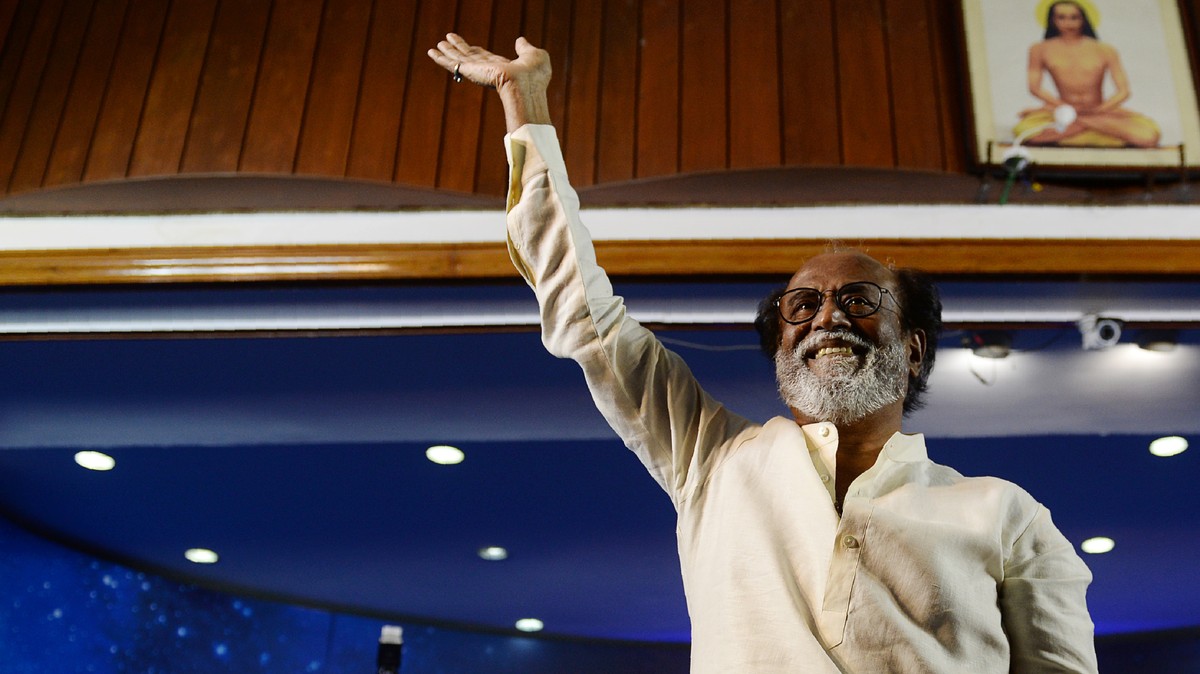 Indian film actor Rajinikanth makes a gesture as he arrives to meet his fans during an interaction session in the southern Indian city of Chennai on December 29, 2017. Photo with the kind permission of ARUN SANKAR / AFP

Indian megastar Rajinikanth announced Thursday, December 3, that he was launching a political party. The party promised by the actor will participate in the next parliamentary elections to be held in the state of Tamil Nadu, in southern India, in May 2021.

Rajinikanth, 69, is one of the biggest celebrities in South Indian film industry, Tollywood.

The actor, affectionately known as “thalaiva (leader)” by his fans, announced via a tweet that his party would be an “uncorrupted, honest, transparent and secular party” with a “spiritual policy”.

With more than 50,000 dedicated fan clubs in the state alone, Rajinikanth said on Twitter that his party “will definitely win the next election,” and promised to announce an official launch date of December 31. The announcement comes just weeks after revealing his health concerns and said he may not be in the best condition to take a political plunge.

The actor said his decision to enter politics was to bring change to Tamil Nadu. However, due to his previous unsuccessful attempts, political experts are slightly skeptical as to whether he will actually launch the party.

Traditionally, the actor has played a crucial role in influencing elections in Tamil Nadu. In 1996, he succeeded in influencing the elections in favor of the DMK by declaring that “even God cannot save Tamil Nadu” if people voted for Jayalalitha, former chief minister and head of AIADMK, who died in 2016.

If launched, Rajinikanth’s party is also expected to reduce AIADMK’s share of votes.

Rajinikanth is revered by his fans, who view him as a larger than life divine entity. In this photo, her fans can be seen pouring her milk as a blessing ahead of her film’s 2016 release. Photo courtesy of Arun Sankar / AFP

Rajinikanth’s political pursuit is compared to Vijaykanth, another actor-turned-politician who formed the Desiya Murpokku Dravida Kazhagam (DMDK) party in 2005. The DMDK managed to secure 10% of the vote in 2006, and won 29 of 39 seats. . in the State Legislature in 2011, becoming the main opposition party.

In India, especially in the southern states, it is common for actors and celebrities to join politics. Jayalalitha, who was chief minister of state for over 14 years, was also a former actor and had even starred in films alongside Rajinikanth. NT Rama Rao, another big name in Tollywood, joined politics in neighboring Andhra Pradesh in 1982 and became the chief minister.

In the next election, Rajinikanth is also set to face Kamal Haasan, another megastar-turned-politician who formed her party in 2018. There is speculation that Rajinikanth may instead team up with Haasan, who is his close friend.

The megastar sparked further speculation about his party’s political leanings when he appointed Ra Arjunamurthy, the former chairman of the state intelligence unit of the ruling Hindu Nationalist Party Bharatiya Janata (BJP) as coordinator in chief of his association of fans. The veteran actor has often expressed his opinion on this position as a pro-BJP.

He supported the controversial decisions of the BJP government, including the decision to remove the special status of Jammu and Kashmir, and amended the citizenship law, which has been criticized for discriminating against minorities from the country. The BJP is struggling to establish a stronghold in Tamil Nadu, after several failed attempts to make an impact.

The actor’s net worth is estimated at INR 3.76 billion ($ 51 million). He is revered as an invincible and larger than life figure thanks to the roles he has performed in the films. His ardent fans even built a Rajinikanth temple dedicated to the actor.