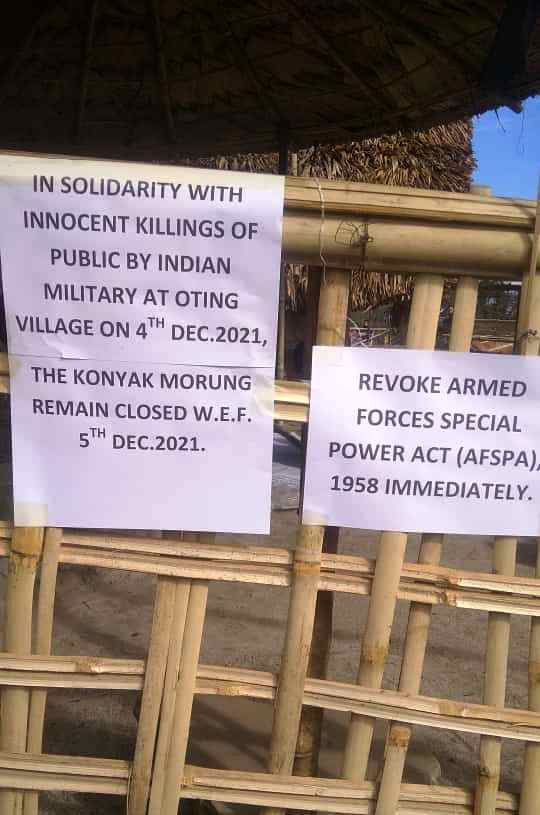 Dimapur, December 7 (MExN): The Naga Hoho today called for the immediate repeal of the Special Powers of the Armed Forces Act (AFSPA, 1958) and also urged the Government of India (GoI) to clarify its position on the Indo-Naga political issue.

There is an ongoing political negotiation and peace process between the GoI and the Naga people which can be evidenced by the signing of various agreements with the Naga Political Groups (NPG), he said in a memorandum to the Prime Minister. Minister Narendra Modi, via the Governor. from Nagaland.

â€œNaga Hoho is convinced that there is currently a peaceful atmosphere in the Naga regions and, therefore, any policy that undermines the atmosphere of trust and confidence would be so dear to all stakeholders and, therefore, the ‘AFSPA must be abrogated from our land,’ he said. noted.

“The Naga Hoho in all sincerity urges the Indian government to clarify its position on the Indo-Naga political issue instead of orchestrating its evil policies against the Naga people,” he added.

The memorandum joined by Naga Hoho President HK Zhimomi and Secretary General K Elu Ndang further demanded “that an immediate judicial investigation into the incident and the perpetrators be brought to justice.”

Naga Hoho’s memo was delivered in the context of “atrocities committed by Indian security forces” that left 14 people dead in Oting and Mon on 4 and 5 December as well as many injured.

â€œThis is not an isolated incident and the Naga people have been repeatedly humiliated and insulted without recognizing our rights to life,â€ he said.

The Naga Hoho has from time to time expressed its “anguish at the insensitive attitude” of the Indian government towards the repeal of AFSPA in the Naga areas despite “repeated appeals from Naga civil society and human rights activists â€,

The Hoho alone have submitted various representations and issued press releases no less than twenty times in the past for the repeal of AFSPA, he argued.

In turn, successive governments, regardless of the various political parties in Delhi, have always decided to remain a silent spectator since the enactment of the draconian laws, he said.

In this regard, Naga Hoho asserted that there is no room for “such draconian laws in any civilized society and do not expect it from the greatest democratic country under your watch”.

“The Nagas’ struggle for self-determination cannot be equated with ‘terrorism’ or ‘secessionism’, as the Indian government has recognized the uniqueness of the political history of the Naga and further recognized the universal principle that in a democracy, sovereignty belongs to the people “, he underlined. .