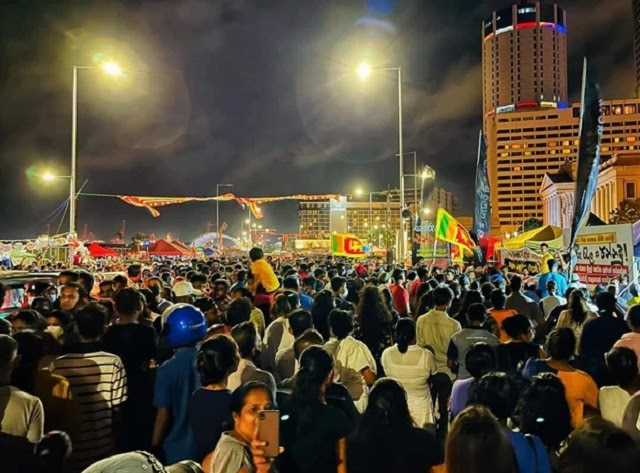 People can make mistakes in elections. When elected representatives escalate or tenure becomes controversial, people should have the right to run for new elections and change the government and members of parliament for the betterment of the country.

“Considering that it is essential, so that man is not compelled to resort, as a last resort, to rebellion against tyranny and oppression, that human rights are protected by the rule of law .” ~ Universal Declaration of Human Rights

The current protests in Sri Lanka are numerous. Most influential has been the Galle Face, Aragalaya (struggle) protests, now exceeding two months. After a half-hearted government change, some of the participants have to stay home or go to work, carefully observing the situation. However, it is superficial to say that the protests are running out of steam.

It is essentially Galle Face protests that could result in (1) ousting Mahinda Rajapaksa as prime minister, (2) Gotabaya Rajapaksa accepting failures as president, (3) he compromises by forming a new Cabinet, and (4) now Basil Rajapaksa to resign from his parliamentary membership.

There are slogans or claims that are idealistic or difficult to achieve. For example, the ousting of the 225 deputies can be considered as one of them. However, it may be symbolic to mean the holding of new general elections to elect 225 new, more people-friendly MPs.

Galle Face manifestations also have a black mark. At least some of the factions, involved in backlash against government deputies and destroying their properties. The most atrocious is the murder of MP Amarakeerthi Athukorala who, however, had himself shot at protesters and allegedly killed one. Six other people were killed during the events. These events must be another reason why some sections no longer participate in the demonstrations.

It was in the 1960s/1970s that I encountered protest movements first as a university student and then as a young university student. Apart from some of my commitments, I was editor of the bi-monthly newspaper Virodaya (Protest) which was banned in 1971. It had nothing to do with the JVP and disapproved of violence.

Historically, the working class has played a leading role in social change and won trade union rights, the five-day work week, minimum wages for workers and even universal suffrage, internationally. . In Sri Lanka, 1953 Hartal (Boycott) is an example. In Russia and China there have even been revolutions.

The 1960s were different. Students, young people and women played a leading role. Paris, Los Angeles, London and Tokyo played prominent roles in youth and student protests. Among other explanations, the “generational struggle” was an interpretation of the new movements. Lewis Feuer (The Conflict of Generations, 1969) was one of the pioneers of these studies. However, many protests were open to many sections of society. The Universal Declaration of Human Rights says the following in the preamble.

“Considering that it is essential, so that man is not compelled to resort, as a last resort, to rebellion against tyranny and oppression, that human rights are protected by the rule of law »,

Do we have tyranny and oppression? First against minorities (1958, 1983). Now it is extended to all sections. Rathupaswala and Aragalayaat Temple Tree Plot were two examples of how tyranny works.

It is the duty of an elected government in a country like Sri Lanka to properly manage the economy and provide for the daily needs of the people. Ten years ago, Sri Lanka appeared as an economically stable and promising country. However, corruption and fraud remained. All of these issues relate directly and indirectly to human rights.

Aragalaya is not the only manifestation. Prior to this, there were widespread protests by peasants and farmers against the sudden ban on chemical fertilizers and the dictatorial order for farmers to use organic fertilizers without any preparation or assistance. These were widespread throughout the country even to call them a popular uprising. Now farmers are being hit by fuel and gas shortages and the machinations of big rice mill owners. They still protest intermittently.

Spontaneous protests also erupted as people had to queue for first cooking gas, then fuel (petrol and desalination), and now even food. People were getting impatient and attacking the workers or the owners of these stores, which no one can tolerate. There is massive unrest among university students due to university closures and other issues. The authorities should resolve these issues with the students, allowing them to represent their views and involving them in the administration of the university. Therefore, there is not a single protest, but a multitude of them in the country.

People have been suffering from shortages of food, fuel, gas, medicine and electricity for six months. There are always long queues even after changing cabinets. Some of Prime Minister Ranil Wickremesinghe’s nonsensical statements heighten speculation. It is the economic and social rights of the people that are flouted by an elected government. The Universal Declaration of Human Rights (UDHR) says the following.

“Everyone has the right to a standard of living adequate for the health and well-being of himself and his family, including food, clothing, housing, necessary medical care and social services, and the right to security in the event of unemployment, illness, disability, widowhood, old age or other lack of means of subsistence in circumstances beyond his control”. (section 25).

Of course, many countries are behind on these standards. However, in the case of Sri Lanka, these conditions were largely present until they were destroyed by government and bureaucrats through mismanagement, fraud and corruption.

Gotabaya Rajapaksa came to power promising “prospects of prosperity”. However, the reality is quite the opposite. He wants to stick to the position, “I can’t go there as a failed president.” It cannot be justified. He could and should go. Election to an office, as deputy or president, does not give anyone the absolute right to remain in that office.

The UDHR says: “Everyone has the right to participate in the government of his country, directly or through freely chosen representatives” (article 21). People, in the case of Aragalaya, have the right to participate directly and indirectly in government, because freely chosen representatives have completely failed. Parliamentary decisions, debates and proceedings are a clear reflection of their failure.

The UDHR further says: “The will of the people shall be the basis of the authority of government”. This is further explained by saying, “it shall/will be expressed by periodic and genuine elections which shall be by universal and equal suffrage, etc.” The will of the people is the basis of government and of all government. A mandate should not be fixed especially in unstable political conditions like in Sri Lanka. This mistake was made even in the 19th Amendment.

People can make mistakes in elections. When elected representatives escalate or tenure becomes controversial, people should have the right to run for new elections and change the government and members of parliament for the betterment of the country. Ranil Wickremesinghe has no popular mandate to become prime minister.

Just because a parliament is elected or a president is elected, the sovereignty of the people is transferred to these institutions. Even between elections, sovereignty belongs to the people. When an elected authority abuses power, the people can exercise their sovereignty by expressing their opinions, their opposition, their protests and even their rebellion, as the Universal Declaration says. However, non-violence is the most effective, reasonable and legitimate way to use this sovereignty.

Aragalaya in this sense, until it was tarnished in the counter-violence in reaction to the Temple Trees coup, was a proper exercise of popular sovereignty. Sovereignty can be exercised individually and collectively. However, when exercised in a limited or sectional way, those who exercise it must also be aware of their limitations. This moderation fell to Aragalaya in my opinion and observation. This is one of the reasons why it should be supported by larger sections.

Today, democracy and good governance are in ruins. Confusion at the highest level is increasing. The most recent scandal concerns what the Chairman of the Ceylon Electricity Board told the Parliamentary Committee on Public Enterprises (COPE) that Gotabaya Rajapaksa told him he had the influence of Indian Prime Minister Narendra Modi “to give the wind power project at Mannar in Adani. The President has denied this claim and the CEB President has now apologized! (See Island Editorial, June 14) This is just after a few days that the government passed an Electricity Amendment Bill in which tender procedures were abandoned.

All this indicates that the current government changes are not going in the right direction. Sri Lanka is currently talking about local government and provincial council elections. What might be most important is to have presidential and parliamentary elections first.

November will bring political change. Will it also change drug prices and PDUFA?