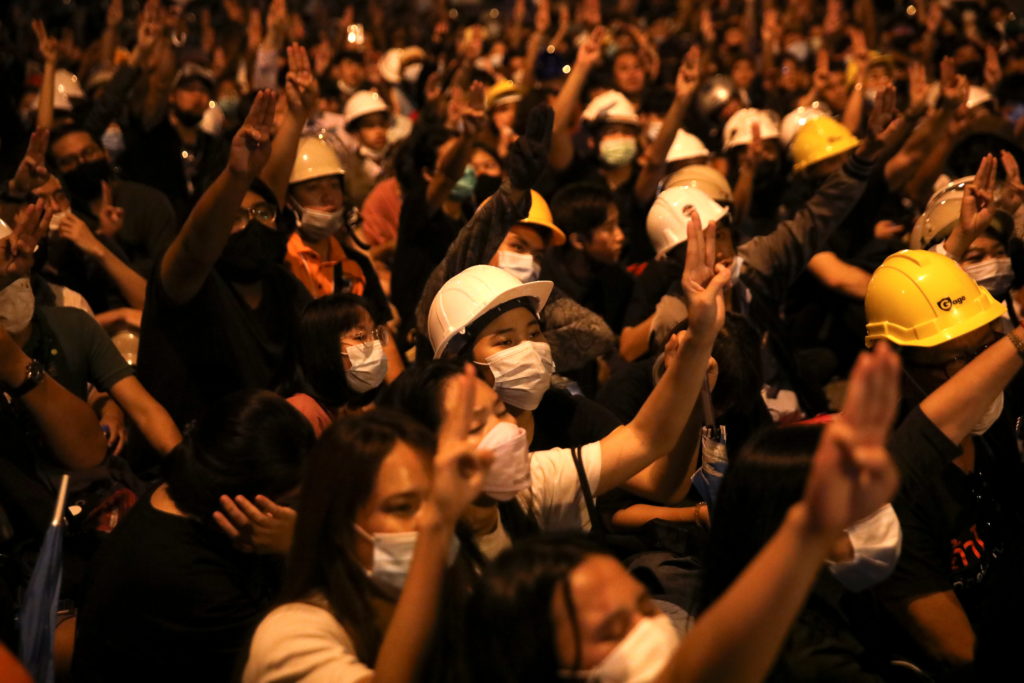 BANGKOK (AP) – He was only 7 years old when he witnessed his first military coup. He was 15 at the time of the second. Now 21, he is among those leading the growing pro-democracy movement in Thailand that is pushing for sweeping political reforms.

And due to his activities, Bunkueanun Paothong has been charged with crimes that could lead him to prison for the rest of his life.

“I took a stand, I know it would be risky,” Bunkueanun said. “I remain firm in my principles and my beliefs. Because it’s the right thing for me to do.

Fed up with an archaic education system and enraged by the military’s efforts to maintain control over their nation, the student-led campaign that began earlier this year has rocked the ruling establishment in Thailand with the La most important for political change in years.

The protesters have three main demands: they want the resignation of Prime Minister Prayuth Chan-ocha; changes to a constitution drafted under military rule; and, most controversially, the reforms of the constitutional monarchy.

Political protest is nothing new in Thailand, and its last 15 years have been defined by it. Whether it was the red-shirted supporters of former Prime Minister Thaksin Shinawatra or his conservative opponents in yellow shirts, you could count on a group every few years to take over an airport, occupy a building. government or block a key road in an attempt to overthrow the government.

And like clockwork, you could count on the courts or the military to intervene. Prayuth, a former general, first came to power in a coup in 2014.

But never before have protesters made such open calls for reform of the monarchy in a country where respect for the royal institution is instilled from birth and protected by a law that makes defamation of family members. royal punishable by prison. The appeals infuriated some, resonated with others and most certainly complicated any solution to the latest crisis.

Many of those on the streets have spent much of their lives under military rule, and those of voting age had their first real chance last year. They flocked to a new party – Future Forward – whose smart, charismatic young leaders espoused a strong anti-military perspective.

The party shocked the establishment by winning the third-highest number of seats. The army’s proxy party succeeded in concocting a ruling coalition that returned Prayuth to the post of prime minister. But Future Forward seemed to have room to grow.

Then, in February, the Constitutional Court ruled that Future Forward had violated campaign finance laws, dissolved the party, and banned its leaders from playing politics for 10 years.

Students, already unhappy with what they saw as an undemocratic constitution that transferred power from elected politicians to appointed bodies aligned with the military, took to the streets.

“What motivates the student protesters is that they consider the ‘game’ of politics to be rigged,” said Chris Ankersen, associate professor at the School of Professional Studies Center for Global Affairs at the University of New York. York, who previously worked with the UN in Bangkok.

The first protests barely had time to spread before the coronavirus pandemic struck and students withdrew. They returned in July, when the threat of the virus abated, and lobbied their main demands for new elections, constitutional changes and an end to the intimidation of activists.

The protests escalated and took a surprising turn in August, when a few students at a rally issued unprecedented criticism of the monarchy. Using direct language normally spoken in a low voice, if at all, speakers criticized King Maha Vajiralongkorn’s wealth, his influence, and the fact that he spends much of his time in Germany. Among their calls were greater scrutiny of royal budgets and an end to the practice of Thai monarchs supporting military coups.

While shocking to many, it has encouraged others.

Events escalated on October 14 when protesters heckled a royal procession that unexpectedly passed nearby. Security personnel stood between the vehicles and the crowd, and there was no visible violence.

Nonetheless, Bunkueanun and two others were charged under obscure criminal law for committing violence against the Queen, who was in one of the vehicles.

“I was numb, stunned and feared for my life,” Bunkueanun recalls. He went to the police the next day and spent a day in jail before being released on bail.

Prayuth and his government responded to the incident and protests with their tested playbook, declaring a state of emergency for Bangkok which banned gatherings of more than four people and granted authorities other sweeping powers. This only led to even larger protests, and the government eventually removed the emergency decree in an attempt to ease tensions.

Prayuth said he was open to some changes, but maintained the monarchy should remain banned.

Students’ questioning of Thailand’s social structure is rooted in their experiences at school, said Thak Chaloemtiarana, a historian who has also served as an administrator at Thammasat University in Bangkok and Cornell University in the United States. .

“The current movement, although led by a handful of college students, has attracted younger students who have become politicized through more news and information from the internet and social media, and spurred on by how their teachers and school administrators repress individualism and exercise authoritarian policies which control dress codes, hairstyles, gender and ceremonies which are considered to stem from feudal times, ”he said .

In addition to political injustices, Thak said, young people were inspired to act by what they saw as the accumulation of power and wealth by the king with the consent of the military, as well as unnecessary spending. of the military during an economy weakened by the pandemic.

The protesters’ objective against the monarchy has led to counter-demonstrations by royalists who allege that students are being used as pawns by unidentified powers behind the scenes.

Unlike previous protests, today’s protesters are much younger and have no clear connection to any group or party, making them appear unscathed from past feuds, said Allen Hicken, a political science professor at the University of Michigan.

The government has so far seemed undecided on how to handle the protests, torn between trying to appease or punish those involved. Neither approach has diminished the ardor or the number of protesters, who deftly use social media to organize short and quickly publicized events that do not require the infrastructure of past protests.

Police use of water cannons and chemical irritants against young protesters this month sparked public outrage, so it is not clear whether the government would push for a more violent crackdown like that of 1973. , 1976, 1992 and 2010.

Chonticha is aware that the story is not on the side of the protesters, but she says that in some ways they have already succeeded.

“Our movement has changed the perception of Thais towards the monarchy and the military,” she said. “If we can’t win this time around, we’ve still planted the seed of criticism of the ruling elite and the monarchy in people’s minds.”