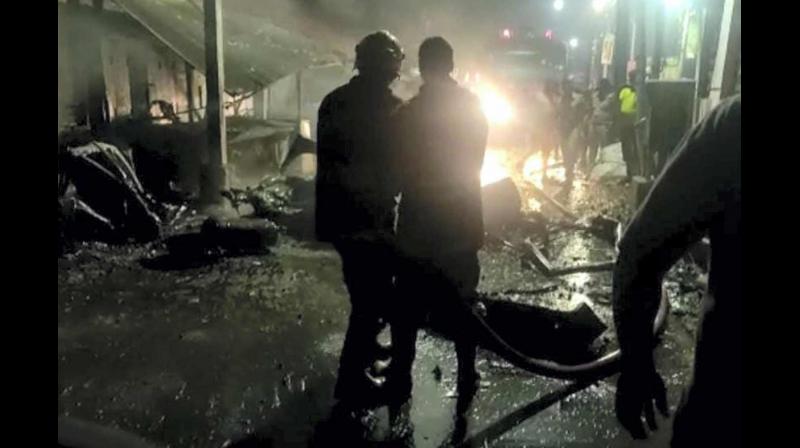 The explosion of a car in Coimbatore becomes a political issue

Chenai: The mysterious explosion that blew up a car, killing its lone occupant, i Sunday morning has become a raging political issue with the opposition BJP and AIADMK pointing the finger at the DMK for the deterioration of the law and the order and ruling party allies accusing the sangh parivar of trying to foment unrest in the state.

Apart from BJP State Chairman K Annamalai who called for a National Investigation Agency (NIA) investigation into the blast, the party MP representing Coimbatore South Constituency Vanathi Srinivasan said that the explosion reminded everyone of the violence that rocked Coimbatore through a series of bombings and riots in 1998.

As the then-growing city became a target of terrorists, Coimbatore lost an opportunity to develop into industrial hubs in the country like Bangalore, Hyderabad and Pune, the local MP said in a statement and also wanted the NIA investigation of the case.

Annamalai, who spoke to the media in Chennai on Tuesday, alleged that Coimbatore had turned into a haven for terrorists and that A Jemisha Mubeen, who was killed in the car blast, was among five people investigated by the NIA in June 2019.

Of the five, two were involved in the bombing in Sri Lanka, he said, and accused the state government of trying to protect someone by not revealing the full truth about Sunday’s incident.

He said his party had written to Union Home Minister Amit Shah to bring the matter to his attention and said that after waiting two days they would meet with the RN Ravi government and brief him on the issue. ‘affair.

Accusing police of not keeping tabs on suspects after NIA raids on Indian Popular Front (PFI) officials, he said the incident was a consequence of intelligence failure.

Palaniswami, who alleged that terrorist activities normally increased whenever the DMK came to power, wanted the state government to arrest the real culprits behind the explosion and bring them before the law.

Panneerselvam said the law and order situation had deteriorated over bomb-making in the state and added that the blast reminded people of the 1998 situation in Coimbatore.

VCK General Secretary Thol Thirumavalavan said the sangh parivar wanted to turn the state into a hotbed of violence and its activities should be closely monitored. Action must be taken against anyone who disrupts law and order, he said in a tweet.

State Minister for Electricity Senthil Balaji said some people could not stage communal riots because they had conspired and jackals in sheep’s clothing would not get the political gains they had aspired to in a state known for its equality.

TNCC Chairman KS Alagiri praised the police for their swift action in apprehending the culprits who had planned to carry out a cruel operation. A major disaster was averted as some young people’s plans failed, he said.

Whoever was behind the plot of the terrorist attack should be dealt with an iron fist and his plans nipped in the bud, Alagiri said, adding that the government should ensure that there is no room for such persons in the state.

AAP an alternative for people to bring political change in the country, says Bhagwant Mann