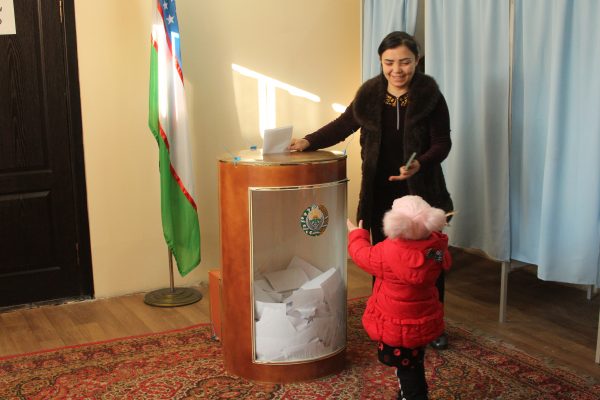 At a polling station in Tashkent, a woman votes in the 2019 parliamentary elections, in front of her daughter.

In less than six months, Uzbekistan is due to hold a presidential election. Despite a five-year reform mantra, the political space remains tightly circumscribed. It seems increasingly unlikely that the October vote will involve any real competition.

According to RFE / RL information, representatives of Allaqulov’s party first submitted their signature list – 20,000 are needed to register a new party – on April 7.

Days earlier, a group of about 20 people accosted Allaqulov in the halls of his apartment building, demanding that he stop engaging in politics. While he was arguing with them, a group of women tried to prevent his family members from recording the incident. This incident occurred after two people attacked party activists and broken office furniture near rented party offices.

The problems did not end with the submission of signatures, however. Pressure increased throughout April, with RFE / RL’s Uzbek service reporting that law enforcement and mahalla committees have urged people to refuse their previous signatures for the party. The pressure is led by both government and social systems in Uzbekistan, in direct (such as a police visit to an activist’s home) and indirect (a neighbor yelling at an activist, perhaps after been visited by the police themselves).

In Namangan, a 24-year-old student who had collected 300 signatures for the holiday was called to a public meeting in a local school gymnasium and berated by a crowd of his neighbors, mostly older women. In a scene reminiscent of everyone’s autocratic forced televised confessions, the student then admits asking his neighbors to sign blank forms and then fill in the party’s name later. But in an interview with RFE / RL, he denied any wrongdoing. He said he explained the new party to his neighbors before getting their signatures.

The student declined to give more details, fearing that his family would come under more pressure from the community.

Then on April 24, the crowd of people filmed accosting Allaqulov in his building lodged a complaint, accusing him of having insulted them and of “petty hooliganism”. While Allaqulov’s complaint to authorities about the incident was ignored, the May 5 he was fined $ 470 for defamation, rather than hooliganism, in a closed hearing.

On April 27, representatives of Allaqulov’s party again submitted their signature list. On May 7, they received a response suggesting that 27 people on their list had died and that more than 2,000 who had signed had asked the ministry to revoke their signatures, saying they did not know what they were signing for. The party claims to have submitted more than 25,000 signatures.

The letter would have rejected their registration, but said the ministry continued to verify signatures – an apparent contradiction. The ministry confirmed to RFE / RL that the party’s candidacy was rejected for lack of sufficient signatures.

Allaqulov is not yet finished, however. Legally, his party can reapply within a month and RFE / RL reports that it aims to recruit more Uzbeks living abroad as it is more difficult for the state to lobby.

Uzbekistan has five officially registered parties, but little competition or debate between them. As a retiree in Tashkent told me in december 2019, on the day of the legislative elections, the authorities had marked with the slogan “New Uzbekistan-New elections”, “We have five parties, but in fact, it is like a party divided into five parts”.

When asked how long it might take for there to be real competition in Uzbek politics, the retiree replied: “It will take some time – 10, 50 or maybe up to 100. years – for a true democratic parliament with an opposition.

We did not discuss how long it would take for an opposition politician to run for president. Judging by the difficulties Allaqulov faced, it might take some time yet.

The $ 414 million school obligation is not a political problem