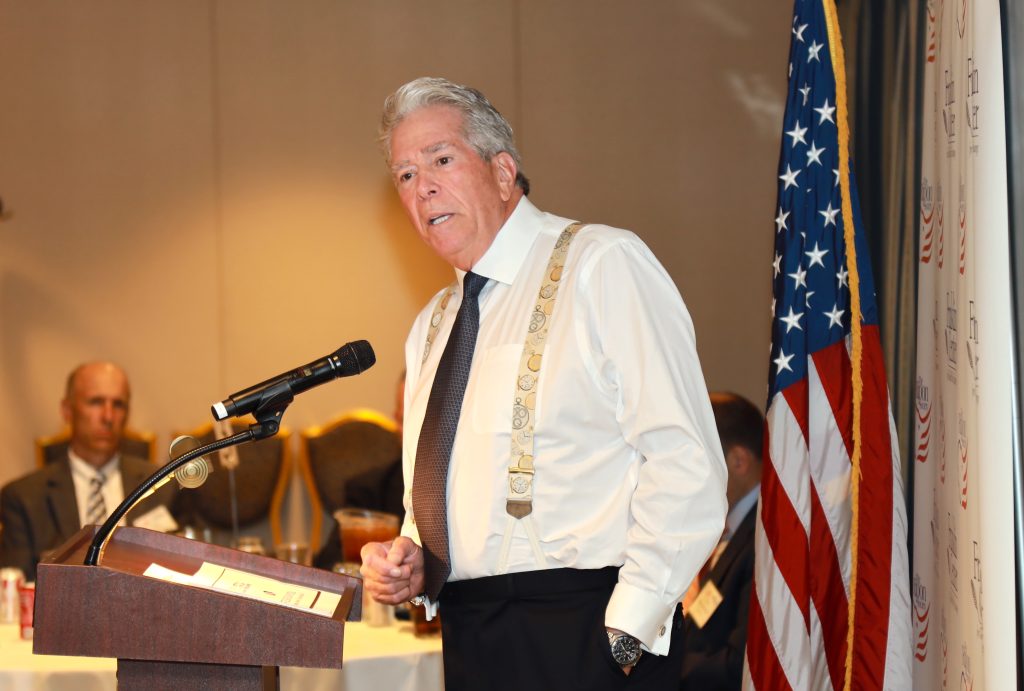 “Voters at the ends of the political spectrum are the ones demanding a fight.”

WASHINGTON, DC — Veteran pollster Ed Goeas appeared before a luncheon meeting of the Ripon Society and the Franklin Center for Global Policy Exchange on Tuesday, delivering remarks on the findings of the latest Georgetown University Battlefield Civility Survey and the rule of civility and respect in American political life.

Goeas, who is chairman and chief executive of the Tarrance Group, began his remarks by examining the extremely low turnout in primary elections across the country, a problem he says is driving the decline of civil bipartisan discourse in Washington.

“What we see in politics today is about 20% of Republicans voting in Republican primaries and 20% of Democrats voting in Democratic primaries,” Goeas said. “People still see redistricting as a problem, which leads to more polarized candidates. The real problem, I believe, is that we have a very small number of Republicans and Democrats who vote in the primaries, and those are the ideologues at both ends of the spectrum.

Before delving into the main findings of the survey, Goeas also briefly touched on the public’s view of the current situation.

“And if you look at the president’s approval rating over time, Biden came into office with 93% of Republicans saying they disapproved of his job — they already thought so before he even took office. They were polarized. They were negative. They were against him from the start. It was only in Afghanistan that he lost the majority of ticket distributors and independents, who opposed him because they thought he was incompetent at what he was doing.

Civility, explains Goeas, is the language of respect. One of the reasons for this decline in respect between Americans of different political persuasions is the rise of isolation among American political factions.

“There’s a lot of data that would indicate that people are trying to separate into their own ‘groups.’ I think that’s probably a bad label. What they are doing is they are trying to enter a “bubble”.

The poll, according to Goeas, was aimed at determining the extent to which individuals separate into these apparent “bubbles”. Specifically, the survey asked respondents what they had in common with their close friends and family.

“They say demographics are everything, but surely people have moved over the last 20 or 30 years to areas where it’s not so much about segregation as going into a bubble that they feel I think it becomes very important to talk about the future to earn respect.

Goeas concluded his presentation by describing the results of a final question on the behavior of elected officials.

“We asked the audience, ‘Which would you prefer: a politician who constantly fights for my values, even if it means not finding a solution very often, or a politician who is willing to work together to get things done, even if it sometimes means compromising on my values? The answer was that 30% prefer politicians who fight for their principles and 66% prefer politicians who fight for solutions and respect the other side. ‘to be optimistic.

“Sixty-seven percent of the American public falls into the centrist category: either somewhat liberal, somewhat conservative, or moderate,” Goeas explained. “Guess where they are on this issue – they are about 90% in favor of politicians who work for compromise. Voters at the ends of the political spectrum are those who demand a fight.

To view Goeas’ remarks before the Ripon Society and Franklin Center lunch meeting on Tuesday, please click the link below

The Ripon Society is a public policy organization that was founded in 1962 and takes its name from the town where the Republican Party was born in 1854 – Ripon, Wisconsin. One of the main purposes of the Ripon Society is to promote the ideas and principles that have made America great and contributed to the success of the GOP. These ideas include keeping our nation safe, keeping taxes low, and a federal government that’s smaller, smarter, and more accountable to the people.